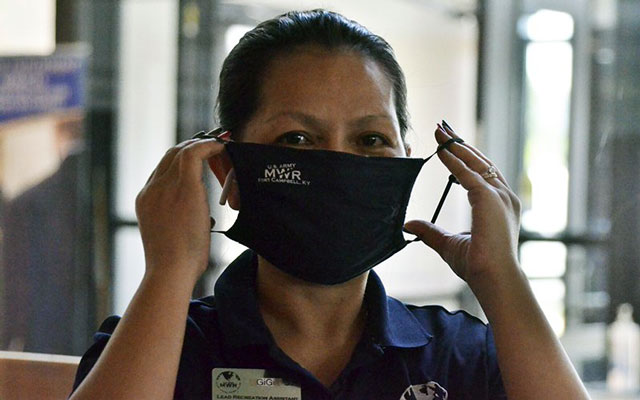 Photo By Ethan Steinquest/U.S. Army: Gigi Jeffery, lead recreation assistant at Fort Campbell, Kentucky, masks up after the Pentagon ordered indoor mask use to help slow the spread of the COVID-19 delta variant, which is behind a recent surge in cases in Arizona. The state is on pace to record its millionth case of COVID-19 before the end of this month.

WASHINGTON D.C. – Arizona is on pace to record its 1 millionth COVID-19 infection within the next week, and health experts fear that kids in schools and the looming Labor Day holiday will only make matters worse.

The Arizona Department of Health Services reported 979,580 cases as of Friday and its data shows that the state had been averaging 2,941 new cases every day over the past week, as the highly contagious delta variant continued its spread.

Another 53 people died Friday from COVID-19 in Arizona, bringing the death toll in the state to 18,561.

Despite the surge in new cases, health experts said that Arizona continues to lack aggressive mitigation efforts that they said could stem the tide.

“For some time, you certainly haven’t been as aggressive with mask-wearing and vaccination,” Dr. Georges Benjamin, executive director of the American Public Health Association, said of the state.

State officials have refused to issue a mask mandate and Gov. Doug Ducey this week issued an order banning local governments from enforcing vaccination requirements. That came the same week that Ducey unveiled a “relief program” that would direct federal COVID-19 funds to schools that do not enforce mask mandates.

Given the lax mandates in the state, Benjamin said residents have an even greater “degree of personal responsibility” for fighting the virus, especially with the upcoming Labor Day holiday that he expects will worsen exposure.

“At the end of the day, the solution is vaccination,” Benjamin said.

The unvaccinated are at higher risk of infection and more likely to contract and transmit the virus, but only 54.7% of Arizonans had received at least one dose of vaccine as of Friday, according to AZDHS. Nationally, the rate was 72.7%, according to the Centers for Disease Control and Prevention.

An AZDHS spokesperson said the agency “has worked nonstop” to make vaccines readily available, to reach out to underserved communities, and to ensure residents that the vaccine is safe and is their best defense.

“Whatever your reasons for not getting vaccinated, the numbers make it clear that safe, free and widely available vaccines offer highly effective protection against COVID-19, including the delta variant,” said Steve Elliott, communications director for the AZDHS.

In Maricopa County, which has the bulk of the cases in the state, more than 1.7 million residents have received at least one dose of the vaccine, but there is still “a long way to go,” said Dr. Nick Staab, a medical epidemiologist with the county health department.

Staab said Friday he does not expect vaccination rates to be at a point by Labor Day where health officials can comfortably rely on the vaccine alone to slow the surge. Regardless, he still encouraged people to get vaccinated if they haven’t already.

All 15 counties in the state were in the “high community transmission” category as of Friday, up from 11 that were in that category at the beginning of the month, according to the CDC.

“These things tend to burn themselves out even if there are no vaccinations, but we can get the numbers down much faster if we can get more people vaccinated,” said Dr. Joshua LaBaer, executive director of Arizona State University’s Biodesign Institute.

LaBaer encourages those who are not vaccinated to get the shot, as well as “doing all the things we know work,” such as social distancing and wearing face masks.

Taking these precautions can help keep children safe, said LaBaer, who noted that about 25% of cases in the state are people under age 18. Many of them cannot get vaccinated – vaccines have not been approved for those under 12 – and they are now back in school.

Because they cannot yet get the vaccine, experts say the best way for young children to reduce their exposure to the virus is through mask-wearing and social distancing. But with Ducey’s recent proposal discouraging mask requirements for schools, the chances children will be exposed are high, said Will Humble, executive director of the Arizona Public Health Association.

Ducey is “paying schools to put their students’ health and safety at risk and ignore CDC mitigation efforts,” Humble said, adding that the “relief program” will unnecessarily cause children to be exposed to the virus.

Humble blames the surge of cases on the governor’s failure to enforce mitigation measures, which has made Arizona a “poor performer.”

“I don’t see anything on the horizon policywise from this governor or whoever the next health director is,” he said.

“That is, wash your hands, stay out of large crowds… and get vaccinated,” he said.