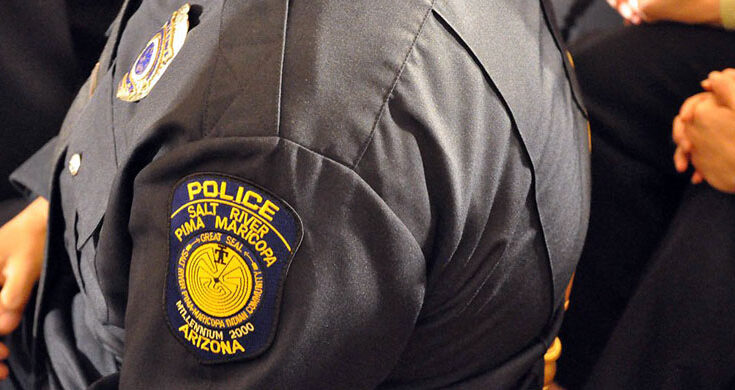 Photo By National Congress of American Indians/Creative Commons: A member of the Salt River Pima-Maricopa Indian Police Department attends a bill signing ceremony in 2018. The Supreme Court this week expanded states’ rights to prosecute crimes on tribal lands, which has been reserved for federal and tribal courts. Critics called the ruling a “disaster.”

WASHINGTON – A divided Supreme Court ruled Wednesday that states can prosecute non-Natives for crimes against Native people on tribal lands, a ruling that critics called a “disaster” for tribal sovereignty and an “act of conquest.”

The court’s 5-4 ruling reverses “200 years of well-settled law” during which only tribal and federal courts had the authority to prosecute crimes committed against Indigenous people on tribal lands.

But Justice Brett Kavanaugh wrote that states do not need “a permission slip” from Congress to try non-Natives for crimes committed within their borders, even if they were committed on tribal lands.

“The Court’s precedents establish that Indian country is part of a state’s territory and that, unless preempted, States have jurisdiction over crimes committed in Indian country,” Kavanaugh wrote for the majority.

In a biting dissent, Justice Neil Gorsuch called the ruling an “unlawful power grab” that gives free rein to states that have historically been the “deadliest enemies” of tribes within their borders.

“Tribes are not private organizations within state boundaries. Their reservations are not glorified private campgrounds,” Gorsuch wrote. “Tribes are sovereigns.

“Tribal sovereignty means that the criminal laws of the States ‘can have no force’ on tribal members within tribal bounds unless and until Congress clearly ordains otherwise,” he wrote.

That position was echoed by scholars of Indian tribal law, who called the court’s ruling “antithetical to tribal sovereignty and tribal treaty rights.”

“The right and power of tribes to rule themselves is being dismissed in favor of state power,” said Elizabeth Hidalgo Reese, an assistant professor of law at Stanford Law School in a tweet Wednesday.

The ruling was the latest in Oklahoma’s fight to reverse a 2020 Supreme Court decision that said a 19th-century treaty establishing the Muscogee (Creek) Nation reservation had never been disestablished. Because of that, Seminole tribe member Jimcy McGirt’s state court conviction for raping an Indigenous child on tribal land needed to be overturned.

McGirt was quickly retried in federal court, convicted in November 2020, and sentenced to life in August 2021. But his case sparked a torrent of appeals in state courts, which determined that much of the eastern half of the state – including Tulsa – was still tribal land, and state court convictions of tribal members there also had to be overturned.

The state pressed dozens of appeals with the Supreme Court, which agreed to take the case of Victor Manuel Castro-Huerta, a non-Native, who was convicted of child neglect for the malnourishment of his 5-year-old stepdaughter, a Cherokee. Although both McGirt and Castro-Huerta involved crimes against Native Americans on tribal land, Castro-Huerta is not a member of any tribe.

Kavanaugh said that Castro-Huerta’s claim that he is not subject to state prosecution makes Indigenous victims “second-class citizens.” He said the state has “concurrent jurisdiction” with the federal government to prosecute such cases.

Gorsuch said the majority opinion “comes as if by oracle, without any sense of the history” of tribes’ maltreatment by state government. “Truly, a more ahistorical and mistaken statement of Indian law would be hard to fathom,” he wrote.

Hidalgo Reese said that deep historical conflicts between tribal nations and states “over land, over territory, over power,” were part of the reason the federal government reserved the authority to prosecute many crimes committed on tribal lands.

“The assumption that states are a neutral party to step in and adjudicate these cases in some way, or in a more neutral way than tribes would be…is deeply bothersome,” she said.

Rebecca Tsosie, a Regents professor at the University of Arizona School of Law, worried about the precedent that could be set with the case. She said the “rationale that’s used in the majority opinion to get to its conclusion repeatedly makes the assertion that tribal lands are part of a state.”

“This was the court’s attempt to create concurrence, state and federal jurisdictions, which has never existed over Indian Country crimes,” Tsosie said.

She pointed to the “poorly-drafted” opinion’s claim that the law since the late 1800s has held that “Indian reservations are ‘part of the surrounding State’ and subject to the State’s jurisdiction, ‘except as forbidden by federal law.’” Tsosie said a future court could use any of those statements “to challenge anything in Indian Country.”

The decision comes at a time when tribes are complaining that states have failed to prosecute criminal cases against non-Indians that are already within their jurisdiction, creating a backlog of cases with Native American victims.

“We have not had effective prosecution by state authorities when non-Indians have committed a crime against Indians where they have a delegated authority,” said Angelique EagleWoman, a professor at Mitchell Hamline School of Law.

She said the Castro-Huerta ruling “is ahistorical and completely disregards the Supremacy Clause that the treaties of the United States are the law of the land.”

The National Congress of American Indians, in a joint statement with the Native American Rights Fund, said the decision “has not only weakened the McGirt case, but has fundamentally altered the long-established understanding of how jurisdiction over non-Indians functions with respect to the federal government, state governments, and Tribal Nation governments.”

Hidalgo Reese said she worries that “concurrent jurisdiction” will merely allow the federal and state governments to shift responsibility for failure to prosecute cases on tribal lands. She also worries that states will use their newfound jurisdiction to argue for more funding, taking funding from tribes that might put it to better use.

EagleWoman said that while some states have been granted authority to prosecute non-Indians for certain crimes committed in Indian Country, their history of prosecutions does not inspire confidence.

“There isn’t a proven track record for tribal nations to think that this decision is going to lead to better conditions on reservations or greater criminal prosecutions,” she said.