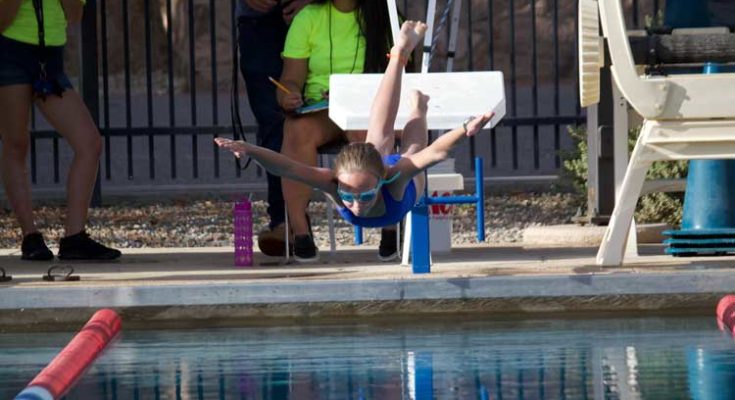 Jon Johnson Photo/Gila Herald: Liliana Johnson and the Pima Flippers leaped into the swim team season against the Morenci Manta Rays on Friday.

MORENCI – The atmosphere was electric Friday night as the 2018 summer swim team season kicked off in Morenci with the Pima Flippers visiting to battle the Manta Rays. Safford and Thatcher also opened their seasons against each other.

There is likely no better place locally to open the season than the Morenci Fitness Center’s aquatic area, which boasted plenty of shade and space for the teams and their fans to pack it in and enjoy the event and well-equipped and maintained facilities.

Right from the opening event, new and returning swimmers hit the water kicking as the cheers from parents and friends permeated throughout.

As her son came and gave her a hug after his turn racing, mother Miquel McRae said that moment is what swim team was all about.

“I love to see the heart and the effort that goes into it,” she said. “It’s fun to watch them give it their all and do their best.”

Angela Paull has four children swimming for Pima. She said her favorite part was seeing them react when they win.

While Pima had the numbers, Morenci had some of the standout performers of the night, including 9-year-old Abraham Cortez – who won every event he swam and blew out the field by taking the 100 individual medley by more than a pool length – and the return of summer swimming for 13-year-old Avery Johnson, who has competed at some of the top meets nationally and had just returned to the area that day after attending a swim camp. Johnson, who is the reigning state champion in the 100-yard butterfly, took home first in every event except for backstroke, where she took home third in a field that included the 15-18 boys and girls bracket.

“I like swimming in the small-town meets because in the summer there’s not a lot of Phoenix or Tucson meets,” Johnson said.

Johnson competes for Swim Neptune out of Scottsdale and finished second in the 200 butterfly at the Far Western Short Course Championships in April in Santa Clara, Calif. with a time of 2:11.30. That time is the best for the 11-12 women’s age group in the history of Swim Neptune and the fourth-best time ever for an Arizona swimmer in that age group, according to Johnson’s father, Lucas Johnson. Short course races are in yards, while long course, such as the Olympics, are done in meters. Lucas said they enjoy coming back to the local summer swimming season to rekindle the simple joy of it all.

“This is the time for them to just have fun,” Lucas said. “This is low-stress; just go out there and do what you can.”

Avery’s mother, Erica Johnson, said she was excited about Morenci’s new school swim team that will debut this fall under Manta Ray head coach Eric Waananen. Lucas and Erica said helping Avery swim for clubs and events year-round can feel like a full-time job, but that if it ends with her getting a scholarship to a university it will all be worth it. Lucas said it would be nice if Morenci starting a high school team would serve as a domino effect leading to other schools, such as Safford and Thatcher having ones as well. While Avery swims for Morenci, she and her family still live in Thatcher and she attends Thatcher Junior High.

“We’re really excited because Morenci will have a swim team in the fall,” she said.

Avery said she has only been swimming butterfly for the last few years, but her goal is to swim collegiately, hopefully for Stanford. Her favorite swimmer, Katie Ledecky, swam her first two years at Stanford before announcing in March that she will forgo her final two years of eligibility to become a professional swimmer. Ledecky, 21, is a two-time Olympian who won five medals (four gold) at the 2016 Olympic Games in Rio de Janerio. In her two years at Stanford, she has won eight NCAA titles and broke 11 American and 15 NCAA records while maintaining a 4.0 grade-point average.

Pima will host Safford on Friday, June 15, while Morenci and Thatcher will face each other.