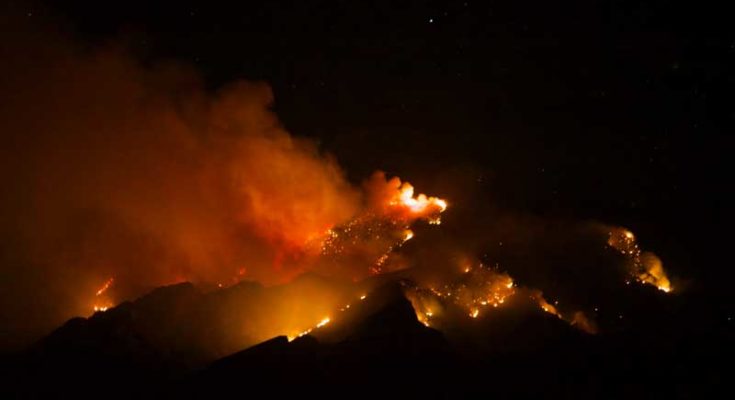 MOUNT GRAHAM – Thursday marked the one year anniversary of the start of the lightning-caused Frye Fire, which burned roughly 48,443 acres.

It burned for more than a month and was finally handed back over to local control July 16 after being listed at 93 percent containment with very few hot edges.

Firefighting efforts saved the Mt. Graham International Observatory as a well-timed slurry of retardant was dropped just as flames came licking at the observatory’s door. Other efforts saved the historic cabins at Turkey Flat and the Angle Orchard. All-in-all, only two structures were burned in the blaze.

The fire burned in a mosaic pattern and went right up to the cabins at Old Columbine before suddenly shifting direction. Caretaker Daryl Weech told the Gila Herald that flooding after the fire did much more damage to the area than the actual fire. According to a burn severity map, most of the fire burned at a low severity.

Flooding was the concern down below, especially in the Cluff Ranch area, which saw rivers of black soot and debris. Flooding also damaged several popular spots on Mount Graham itself.

In Pima, Town Manager Sean Lewis instigated a plan to clean out ditches to help keep the floodwaters traveling safely through town and into the Gila River.

One of the major victims of the fire, ironically, was the endangered Mt. Graham red squirrel, which had, in part, prevented thinning of the forest. The fire decimated the squirrel’s population from 252 to about 35, according to an annual survey.

After having to attempt to survive the winter in a smaller area, it is unknown how many squirrels are left, or if they will soon be thought to be extinct like they were in the 1950s and 60s. If all the wild squirrels are gone, there still is a handful at the Phoenix Zoo, which began a pilot captive breeding program with six squirrels in 2014.

Most areas of Mount Graham have reopened for public use, but some trails and areas should still be carefully used as downed trees and other debris present a hazard.