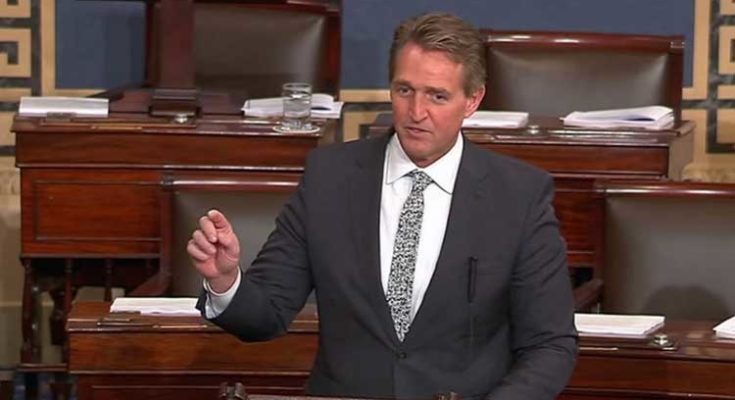 Contributed Photo/Courtesy Office of Sen. Jeff Flake: Sen. Jeff Flake, R-Arizona, took to the Senate floor to decry President Donald Trump’s latest tariffs on steel and aluminum, but the speech soon turned to criticism of the administration and its “bullying and threats, taunts and brinkmanship.”

WASHINGTON D.C. – Arizona Sen. Jeff Flake, R-Arizona, took the Senate floor Thursday to “sound the alarm” on President Donald Trump’s trade policies in a speech that quickly became a discourse on liberty, freedom, and America “turning our back” on its responsibility as a world leader.

The Arizona Republican’s 16-minute speech was another in a series of sharp criticisms of the president – whom Flake did not mention by name – and the administration, which he said is reversing decades of diplomacy with “an ill-considered tantrum, a childish taunt here, a bellicose insult there.”

It also revived speculation that Flake, who is not seeking re-election, may have his sights set on a higher office – speculation boosted in no small part by a Trump tweet belittling the possibility that Flake would even “think about running for office . . .  again.”

Flake’s office did not respond to a request for comment Thursday, but while he has said in the past that he is not considering a run for office, he is also not ruling it out.

Political analysts said Flake would face long odds if he did try to run for president in 2020. His recent outspokenness is more likely an attempt to “enhance the Flake brand,” said Republican political consultant Jason Rose, who added that “the Flake brand right now is one of a loser.”

Flake’s speech came one week after the White House announced tariffs of 10 percent on imported aluminum and 25 percent on steel from Mexico, Canada, and the European Union, citing a provision of the law that allows tariffs in the interest of national security. And it came one day after he joined a bipartisan group of senators who introduced a bill to limit the president’s ability to apply tariffs under the Section 232 provision.

Flake derided administration claims that imposing tariffs is a negotiating tactic and that the U.S. is “in the leisurely early innings of a baseball game.”

“We are in the nascent stages of a full-scale trade war,” he said.

In the days since the White House announcement, both Mexico and Canada announced retaliatory tariffs on U.S. goods and EU officials blasted the U.S. move as a “bad day for world trade.”

Flake said it was another example of the U.S. abandoning its leadership position in the world under this administration, which continues to burn bridges with key allies.

“Make no mistake, our allies and those who look to American leadership will not wait for us to come to our senses,” Flake said in his Senate speech. “If we abandon our role as a leader in the world today, it may very well not be there tomorrow.”

The speech then turned from current events to U.S. history, with Flake touching on everything from the Founding Fathers to World War II, from the “lanterns in Boston’s Old North church, lit during the midnight ride of Paul Revere, to the light that shines above our Capitol today.”

Trump’s tweet came hours before the well-publicized speech, which was expected to be critical of the president. The White House did not respond to a request for comment after the speech.

Political analysts were not surprised by the tone of the speech, as Flake has emerged as a leading Republican critic of the president. But that criticism would not likely carry Flake in a race against Trump, they said.

“I don’t think that at this moment there is a big appetite amongst potential Republican primary voters to not support the president in 2020,” said Kyle Kondik, managing editor of Sabato’s Crystal Ball, a political newsletter based at the University of Virginia. “If Flake had a great standing amongst Republicans, he probably would be running for U.S. Senate.”

Leah Askarinam, a reporter and analyst at Inside Elections, said that Flake’s well-known outspokenness on Trump hurt his chances at re-election to the Senate this year.

“It’s really hard for Republicans running in this cycle for Senate to criticize the president and still have a base that can get them through a primary, I think that’s part of the reason you’re not seeing more of it,” Askarinam said.

Rose – who said Flake has “as much chance at becoming president as Devin Booker of the (Phoenix) Suns” – speculated that the senator is simply figuring out his next career move after he leaves office.

“Jeff Flake is not a wealthy man,” Rose said. “He needs to figure out how he’s going to put food on the table … a presidential run might be a means to an end toward enhancing himself as a television commentator.”