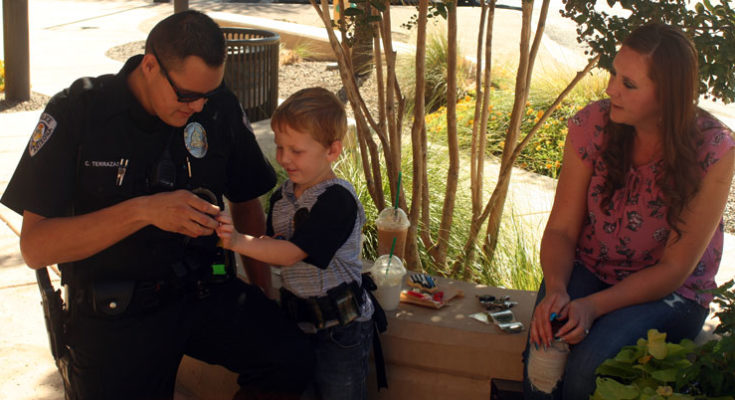 Walt Mares Photo/Gila Herald: Carter Carrasco inspects an item being shown to him by Clifton Police officer Clayton Terrazas as mom Heaven looks on. She said 4-year-old Carter is absolutely fascinated with anything having to do with law enforcement. Heaven and Carter came from their home in Pima, 50 miles away, because of the child’s strong interest in the subject. They were all attending the Oct. 3, 2019 “Coffee With Cops” sponsored by Starbucks at the coffee shop in Morenci.

MORENCI – A true story. A police officer walks past. There is a young mother standing close by. She tells her small child, “See that man? If you don’t behave he’s gonna get you.”

And what kind of impression was made on the child? He is taught to be afraid or mistrusting of law enforcement officers. Perhaps it is an impression the child will maintain into adolescence.  People should be afraid of cops and not trust them?

That was the message “Coffee With Cops” was working to dispel. The event, sponsored by Starbucks, was held Wednesday, Oct. 3, at its Morenci coffee shop. There were several children, their parents and other adults who attended and it was a very positive experience.

“I thought it went great,” said Starbucks manager Shelby Brinkley. “It went better than I expected.”

Officers from the Clifton Police Department and Greenlee County Sheriff’s Office were on hand to meet the public. The event ran from 8-10:30 a.m. Throughout that time, Starbucks was swarmed with folks who wanted to meet up close and personal the people “who we trust and depend on to keep us safe,” one woman said. “They’re people we can depend on to do what’s best for the community. Trusting them is very important. That’s especially true for kids.”

It was mostly mothers who brought their children and introduced them to officers. Among them was Carter Carrasco and mom Heaven. They are from Pima, a community about 50 miles from Morenci.  Heaven said her son, who is only 4-years-old, is fascinated by anything to do with law enforcement. He and Clifton Police officer Clayton Terrazas hit it off quite well.  The tall officer sat on a cement curbing where the child and his mother sat. Even when Carter stood on the curbing he was quite shorter than Terraza’s upper frame. The officer showed the child the various equipment that officers carry. Carter stared in fascination and then began asking questions about all the items the officer carries.

Emphasizing Carter’s fascination was the toy camouflage utility belt, complete with pockets.  Terraza spent at least 20 minutes explaining what he carries and the function of each item. When he left, Carter wore a big smile and danced about. He was obviously excited about who he had just met and what he had just experienced.

Children were also delighted with “Chase” the sheriff’s office drug detection dog. There was nothing fierce about Chase. The dog lapped it all up as kids petted and even hugged him.  Many adults also took the opportunity to pet and they grinned as they did so. Some spoke to the dog in what is known as “puppy talk.” That is they cooed and spoke to him as they might to a child.

Make no mistake. While Chase is gentle around such folks who were at the event he is all business when he is on the job in detecting drugs. And he has been very successful at it, said his handler Deputy Robert Carrasco (no relation to Carter or Heaven).

The dog is obviously a major asset of the sheriff’s office. There have been several instances when Chase has alerted officers about the presence of illegal drugs. A New Mexico man whose vehicle Chase hit on earlier this year was recently convicted for possession of illegal drugs. His next home will be state prison.

Coffee With Cops provided an opportunity for people to meet with officers or stay in touch with cops they already know. There were also those who were unaware of the event and joined in to shake hands, meet their local law enforcers and have a most positive experience. Brinkley said the idea for the meet and greet with officers originated from the Starbucks website. She said she thought it was a great idea but was not sure how to go about.

She contacted Clifton Police Chief Omar Negrete and Greenlee County Sheriff Tim Sumner, both of whom attended the event.  Clifton officer Shari Aguilar and sheriff’s deputies Robert Carrasco, Austin Wilson, and Mark Crandell were also at Coffee with Cops and were part of the unique and positive event.

During the event, a surprise occurred. Greenlee Sheriff Tim Sumner, acting impromptu and with good humor, donned a green Starbucks apron and began assisting baristas with passing out cookies that Starbucks provided to everyone. The cookies, all covered with icing, were a very big hit. They were free and delicious as was the coffee.

“The baristas had fun, a great time mingling with the cops,” Brinkley said. As for the cookies, she said, “The kids really liked them along with the stickers they were given.”

Round stickers with the emblem of a badge were given by deputies to children. Overall, no doubt that those children who attended Coffee with Cops may not grow up fearing or mistrusting cops. As several of the officers at the event said, “We’re here to serve” and they did not mean serving coffee.