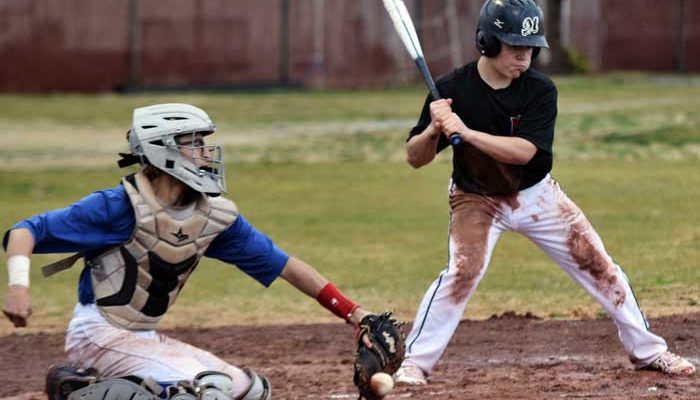 Photo By Raymundo Frasquillo: A Morenci batter lets the pitch go by as the Safford catcher tries to find the handle.

Gila Valley – Yes, some teams are still battling for a roundball championship, but others have now turned their attention to other matters.

Spring sports begin competition this week, as both Safford’s baseball and softball programs were hosted by Morenci for scrimmages amidst light rain showers Feb. 16.

Safford opens its baseball season at home with back-to-back games against Willcox on Thursday, Feb. 22, at 6 p.m. and Coolidge for a 3A Central contest Friday, Feb. 23, at 2 p.m.

Safford’s softball team also opens at home against Coolidge on Feb. 23 at 2 p.m. The 2017 quarterfinalist lost 4-1 to No. 12 Tucson Empire, the eventual 3A state champion, as the No. 4 team.

Morenci baseball and softball programs open in Tombstone, the ‘Town too tough to die,’ on Saturday, Feb. 24, at 2 p.m.

Second-year softball coach Joseph Garcia (25-7-1 overall, 1-1 state) liked what he saw during the scrimmage. The Wildcats return five senior letter winners from a state quarterfinalist that bowed out 2-1 in 11 innings to No. 6 San Manuel as the No. 3 team, after a 4-1 first round win over No. 14 Scottsdale Christian.

Fourth-year baseball coach Joseph Morse (36-44-1, 0-1) also liked a lot of what he saw; however, there were some things he told the Wildcats he never wanted to see again. All of the Wildcats were able to show what they could do both with a bat and a glove. Morenci’s 2017 baseball team did not qualify for the state meet.

The Wildcats and Bulldogs also offer golf, tennis, and track and field programs. Morenci’s golf opener is in Benson on Feb. 27, the tennis opener at home with Willcox on March 1 and the track opener is March 3 in Buckeye.

Safford’s tennis teams host Miami on Feb. 22, the golf team opens in Benson on March 1, and the track and field teams are slated to open in Douglas March 3.

During eight sports thus far, Morenci student-athletes qualified for five of eight team state meets, finishing as state quarterfinalists in 2A football with a 45-7 loss to top-ranked Eagar Round Valley as No. 4, and sixth of 22 teams in Division IV during the boys state cross country meet in the Fall; and as Division IV state runners-up in wrestling, sixth of 10 teams in Division II Coed Cheer, and as part of the round of 16 in 2A boys basketball as No. 12 during the winter.

In girls sports, the volleyball team exited the 3A state meet with a 3-1 first-round loss to No. 12 Tucson Tanque Verde as No. 5, the cross country team finished 16th of 20 Division III teams, the soccer team left with a 1-0 first round 3A meet loss to No. 5 Glendale Trivium Prep as No. 12, and the cheerleaders placed third of 10 in Division III Cheer and fifth of nine in Division III Stunt.

For boys, the cross country team ended 12th of 27 teams, the wrestling team was 4th of 43 Division III teams, the soccer team bowed out with a 4-0 quarterfinal loss to No. 12 Tucson Sabino as No. 4, the basketball team lost 54-42 to No. 4 Chandler Valley Christian in the 3A state second round as No. 13, and the football team did not qualify for the 3A state meet.

The Bulldogs are in the 3A girls basketball quarterfinals as No. 6 versus No. 3 Page on Feb. 19 in the Prescott Valley Event Center at 2:45 p.m.