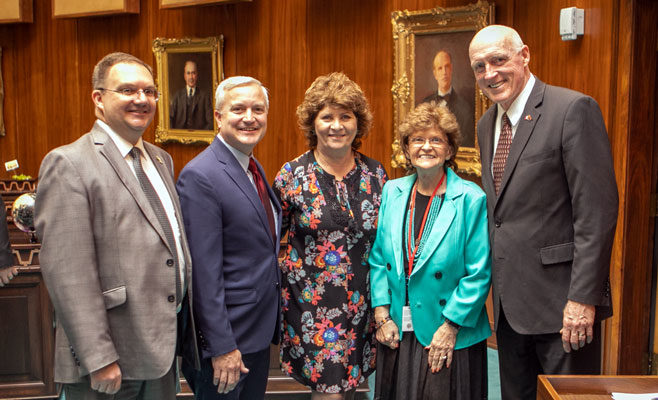 I cannot and will not entertain a suggestion that we violate current law to change the outcome of a certified election.

PHOENIX – This week, Rudy Giuliani, Jenna Ellis, and others representing President Donald Trump came to Arizona with a breathtaking request:  that the Arizona Legislature overturn the certified results of last month’s election and deliver the state’s electoral college votes to President Trump.  The rule of law forbids us to do that.

Mr. Giuliani and Ms. Ellis made their case here at least twice — on Monday, at an unofficial public gathering hosted by a small group of legislators; and again on Tuesday, during a closed-door meeting at the State Capitol with Republican leaders from both chambers of the Legislature.  Both times, the Trump team made claims that the election was tainted by fraud but presented only theories, not proof.  U.S. Attorney General William P. Barr said on Tuesday that he, too, has “not seen fraud on a scale that could have effected a different outcome of the election.”

Even if such evidence existed, the Arizona Legislature simply couldn’t do what is being asked.  Under our state’s constitution, the Legislature can act only when it is in session, and the Legislature could call itself into a special session only with the support of a bipartisan supermajority of its members.

That won’t materialize, but even if did, the Legislature couldn’t provide the recourse the President’s team seeks.  The U.S. Constitution authorizes each state to appoint presidential electors “in such Manner as the Legislature thereof may direct.”  For decades, Arizona law has required that the voters elect the state’s electors on Election Day — this year, on Nov. 3.  And under a law the Republican-led Legislature passed just three years ago, the state’s electors are required to cast their votes for the candidates who received the most votes in the official statewide election canvass.  Enacted after the 2016 presidential election, in which President Trump won the electoral college but not the popular vote, the law was aimed at ensuring that Arizona’s electors would remain faithful to the vote of the people. So, under current Arizona law, the presidential electors who were elected on Nov. 3 must, after the canvass is completed, vote for the winners of the popular vote.  Nothing in the U.S. Constitution or the decisions of the U.S. Supreme Court even suggests that the Arizona Legislature could retroactively appoint different electors who would cast their ballots for different candidates.  The Trump legal team has cited McPherson v. Blacker (1892), to claim that the legislature can “resume the power [to appoint electors] at any time.”  And it is true that the Arizona Legislature could alter the method of appointing electors prospectively.  But it cannot undo the election of electors whom the voters already voted for.  As the Supreme Court made clear in Bush v. Gore (2000), “[w]hen the state legislature vests the right to vote for President in its people, the right to vote as the legislature has prescribed is fundamental.”

No election is perfect, and if there were evidence of illegal votes or an improper count, then Arizona law provides a process to contest the election: a lawsuit under state law.  But the law does not authorize the Legislature to reverse the results of an election.

As a conservative Republican, I don’t like the results of the presidential election.  I voted for President Trump and worked hard to reelect him.  But I cannot and will not entertain a suggestion that we violate current law to change the outcome of a certified election.

I and my fellow legislators swore an oath to support the U.S. Constitution and the constitution and laws of the state of Arizona.  It would violate that oath, the basic principles of republican government, and the rule of law if we attempted to nullify the people’s vote based on unsupported theories of fraud.  Under the laws that we wrote and voted upon, Arizona voters choose who wins, and our system requires that their choice be respected.

Forty years ago next month, President Ronald Reagan reminded us that while the “orderly transfer of authority” is a “commonplace occurrence” for Americans, “[i]n the eyes of many in the world, this every-4-year ceremony we accept as normal is nothing less than a miracle.”  Now, Americans are being reminded once again never to take for granted what President Reagan correctly described as “the continuity which is the bulwark of our Republic.”