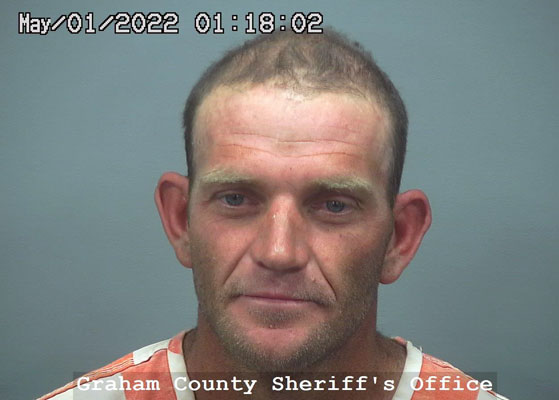 Contributed Photo/Courtesy GCSO: Charles Dankworth was given an assault charge while serving time in jail after an altercation with another inmate.

GRAHAM COUNTY – When one thinks of an assault between inmates in jail one likely doesn’t imagine an inmate getting damp – but here we are.

On Sunday, Charles William Dankworth, 40, was given an assault charge for allegedly filling an empty coffee bag with water and expelling the water through another inmate’s cell door. Dankworth said he folded the bag over and placed it at the bottom of the door and then stomped on the bag. The water then traveled through a cell door and wet another inmate’s pants, according to the Sheriff’s Office report.

Dankworth was incarcerated on weapons charges and pleaded guilty on July 25 to a charge of disorderly conduct with a weapon.

He told a deputy that the situation between himself and the other inmate had been building since the inmate failed to pay him back “10 soups” when he got his commissary. Dankworth said the inmate also was causing a disturbance when Dankworth was on the phone with his mother, causing him to not be able to hear her.

The culmination of the perceived slights pushed Dankworth over the edge, he told a deputy, and he concocted his revenge.

While doing so, the victim inmate initially believed the liquid inside the bag to be urine, however, surveillance footage from the jail shows Dankworth filling a bag with water from his sink and then stomping on the bag under the door.