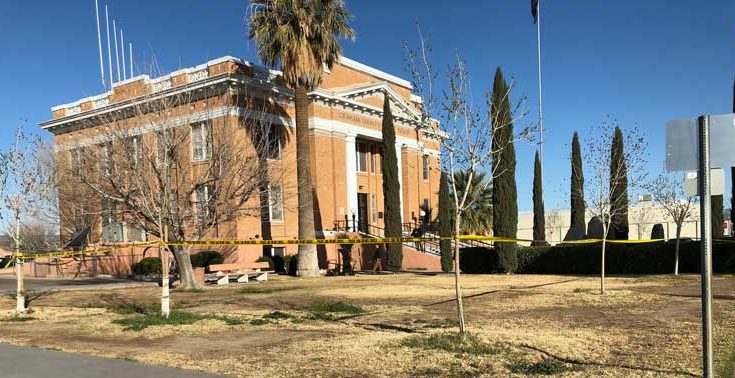 File Photo By Rebecca Johnson: The Graham County Courthouse remained cordoned off with crime scene tape the morning after it was set on fire. A suspect has been arrested for the arson.

SAFFORD – Fingerprints left on a green propane bottle found at the scene of the crime led Graham County Sheriff’s Office investigators to the arrest of Preston Edward Yapp, 19, for the late-night arson of the Graham County Courthouse on Feb. 22.

Yapp was arrested and booked into the Graham County Adult Detention Facility on March 19 after allegedly admitting to the arson during interrogation.

Authorities were initially dispatched to the courthouse at about 11:41 p.m. after a witness reported seeing a man set the courthouse on fire and then run from the scene. The fire was started on a wooden door underneath the courthouse’s front stairs that leads to a storage room. Firefighters had to force the door open to extinguish the blaze before it started burning the recently renovated basement area. Two Toro lawnmowers were damaged in the fire, and the basement’s emergency metal doors and interior suffered minor smoke damage. The estimate for the total cost to replace the damaged items and clean was $3,148.

Investigators had canvassed the area’s gas stations for gas purchases under $5 due to a witness statement that the arsonist had fled with a gallon jug and received footage from two gas stations. However, it was the ability of the Arizona Department of Public Safety Crime Lab to locate fingerprints on the green burned propane bottle and match them to fingerprints on file for Yapp through the Arizona Automated Fingerprint Identification System that broke open the case. Yapp has been found guilty of shoplifting and contributing to the delinquency of a minor on multiple occasions as well as criminal trespassing at Safford High School.

After identifying the suspect, it was up to Graham County’s investigators to get Yapp to confess. He was soon located at his place of employment, and he willingly came in for an interview.

During questioning, Yapp first attempted to blame a juvenile he knows and said he purchased two bottles of propane, some kerosene, and a filled a gallon jug with gasoline for the juvenile, who Yapp described as someone who would set things on fire for money. Afterward, investigators learned the juvenile Yapp blamed was incarcerated at the Eastern Arizona Regional Juvenile Detention Facility at the time of the fire and therefore could not have met with Yapp as he stated or set the fire.

Yapp then described how he started the fire using the propane tanks, kerosene, and gasoline. The Gila Herald has chosen not to go into detail in an attempt to avoid copycat fires.

His new version of events matched that of what investigators and firefighters discovered at the scene, including his flight from the area, which was observed by two college students who were in the area by chance after realizing Dairy Queen was closed and their late-night ice cream fix went unfulfilled.

According to Graham County Sheriff’s Office reports, Yapp said he started the fire in the storage area of the courthouse’s breezeway after a woman offered him $200 to do so. He said the woman was a conspiracy theorist who believed police officers planted evidence on her daughter which was then later used in court.

Yapp was then arrested and booked into the jail on a charge of arson of an occupied structure. He is also a suspect in a car fire that occurred on Mullins Lane.