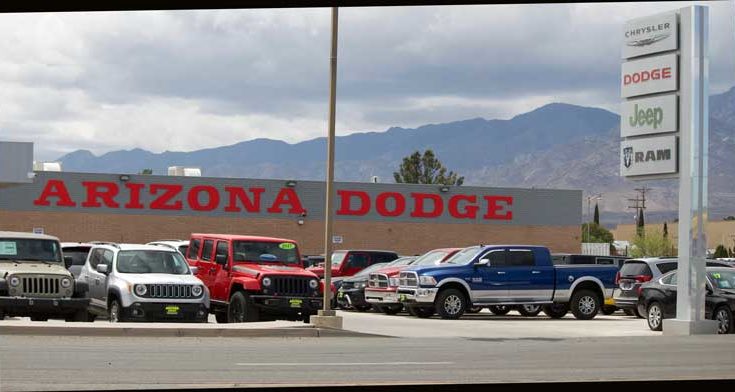 Jon Johnson Photo/Gila Herald: A Chrysler 300C was stolen from Arizona Dodge on Friday. The car was reportedly located in Phoenix on Monday morning.

SAFFORD – Someone decided to make their own can’t-beat-deal and made off with a high-value car from the Arizona Dodge dealership at 1623 W. Thatcher Blvd. on Friday but they only had it for the weekend.

Safford officers were dispatched to the lot at about 8:38 a.m. regarding the theft of a Chrysler 300C.

According to an employee, the car was parked in the southwest corner of the lot when the last worker left Thursday night at about 6:30 p.m. and it was discovered missing the following morning.

Numerous employees have used the vehicle regularly, but after checking that nobody had taken it the authorities were notified.

According to the employee, the key FOB was likely inside the car and it was probably unlocked. The vehicle has a keyless vehicle start button and will start as long as the key FOB is inside the vehicle.

The dealership informed the police that they would attempt to get a GPS location on the vehicle using its U-Connect feature, which allows users to access their vehicles and use a smartphone to unlock a vehicle and start its engine, as well as other features.

The dealership also reported that they had contacted their security company to get surveillance footage of the vehicle leaving the car lot.

An employee told the Gila Herald that the vehicle had been located Monday morning in Phoenix and they were working on returning it to the dealership.

The Chrysler 300C, which is the top trim in the 300 class, comes standard with a 5.7-liter Hemi V8 engine and has a base price of roughly $41,000. It also has deep quilted perforated and ventilated Nappa leather seating, adaptive high-intensity discharge headlamps, and an upgraded heated leather-wrapped steering wheel.