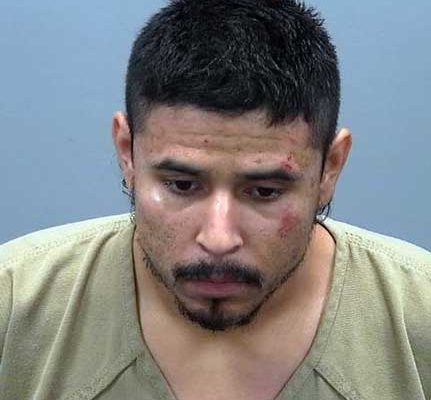 Contributed Photo/Courtesy GCSO: Andrew Gaxiola was apprehended with more than 10 grams of heroin after passing out with his vehicle running in the parking lot of the Graham County Health Department.

SAFFORD – A Graham County Sheriff’s deputy arrested a man for possession more than 10 grams of heroin after finding him reportedly “on the nod” passed out in a running vehicle with another man, ironically in the parking lot of the Graham County Health Department on Friday night. Safford officers were also on scene to assist.

According to a Sheriff’s Office report, Gaxiola was found passed out at about 5:44 p.m. in a running Dodge Challenger that sported an Oakland Raiders sticker on its back window. His passenger, Michael Vega, was also located asleep with a hypodermic syringe in clear view on the passenger’s side floorboard.

Upon waking the pair, Gaxiola eventually attempted to flee the scene on foot after reaching for something between the seats. Gaxiola pushed the deputy and tried to run past him, but the deputy grabbed onto his T-shirt and arm. Gaxiola then attempted to strike the officer with his elbow and was reaching into his pocket, according to the deputy’s report.

The deputy then took Gaxiola to the ground, and a Safford officer assisted in placing him in handcuffs.

According to the deputy, a plastic baggie containing a “large black rock substance” found on the car’s hood was in Gaxiola’s hand when he attempted to flee. Gaxiola allegedly later admitted the substance was heroin and used the “Costco” defense for it being only for personal use. He said he came across a good deal on the heroin and purchased the large amount solely for personal use and that he didn’t intend on selling any of it.

Vega allegedly admitted the syringe was his and that they had both used it to inject heroin. Vega was released from the scene with pending charges of possession of drug paraphernalia being forwarded to the Graham County Attorney’s Office.

The total weight of the heroin came out to 10.4 grams. Gaxiola was transported to the jail and booked on his drug charges and for resisting arrest.