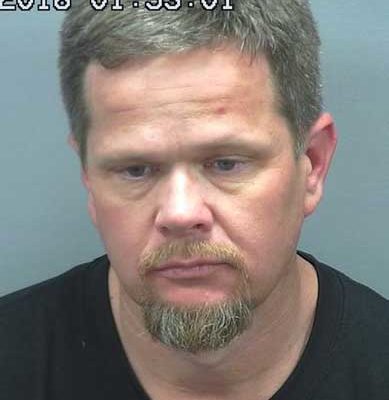 GRAHAM COUNTY – A Thatcher man found himself in hot water Saturday, March 31, after sending what officers deemed as threatening messages to his daughter.

A deputy was initially dispatched to a residence on S. 1st Avenue at about 10:22 p.m. regarding a man standing outside a residence with a pistol. Upon arrival, the deputy located a man in the area who said he was a family member and had just arrived. The man called to a female in the residence who identified herself as the victim and stated the man with the gun, Myers, had already left in a grey Ford F-250 pickup truck.

The victim said Myers was her father and that he had sent threatening text messages to her advising that he had his gun and was going to “show them what he meant.” The messages, which were rife with profanities, also stated Myers intended on attaching a tow chain the victim’s mother’s car and haul it away. The victim’s mother had filed for divorce from Myers in September 2017, and the daughter said Myers was angry because she wouldn’t answer her phone.

Another woman advised she had received phone calls from Myers and that he claimed to have a 9mm gun and was “going to hurt people.”

While being taken into custody at gunpoint, Myers allegedly complained that the deputies were harassing him and advised that he was “a business owner.” Myers owns and operates Advanced Air Systems.

Myers claimed the text messages were garbled because he used a voice text feature. He denied having any guns in his possession and allegedly asked if the deputies didn’t have bigger criminals to go after. He then told the deputies if they wanted to see his 9mm handgun they would have to go to his father’s house and see it in the gun safe there, according to a Sheriff’s Office report.

However, a search of Myers’ truck located two pistols, a Ruger P89 9mm handgun and a Walther P22, along with 15 9mm rounds, four .38 special rounds, and a .22 round. The search also located two glass pipes commonly used to smoke meth, 2 pen tubes, folded aluminum foil, a small quantity of black tar heroin, 1.5 pills of Oxycodone-30mg, and two Alprazolam-.5mg pills that were in an Advil bottle. Oxycodone is a narcotic pain reliever and Alprazolam is an anxiety medication that goes by the trade name Xanax.

After showing the items to Myers, the suspect said he has been addicted to narcotic pills ever since having back surgery 10 years ago and was supposed to go to a rehab in Prescott but his assistant told him his business couldn’t run without him. He also advised he had a valid prescription for the medications at his residence and denied knowing about the heroin.

Myers was then taken to jail and his truck was impounded.