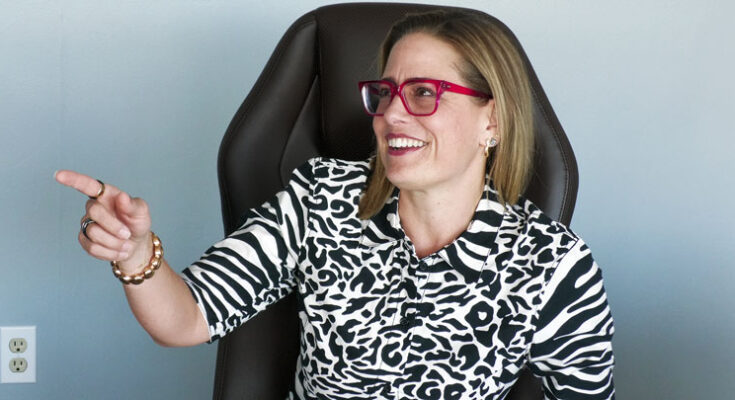 Jon Johnson Photo/Gila Herald: Senator Kyrsten Sinema was talking infrastructure and water with Graham and Greenlee counties’ leaders during a roundtable at the Safford Regional Airport on Tuesday.

After serving nearly a full term as one of our two state senators, Kyrsten Sinema visited Graham County for the first time on Tuesday for what one could equate to a quick stop to gas up her plane.

Sinema spent just 80 minutes on the ground in Graham County, in an efficient and somehow seemingly sufficient effort to hear the issues plaguing Graham and Greenlee counties from the local leaders themselves.

“My number one goal for today is to hear from community leaders in Graham and Greenlee counties about what their infrastructure needs are,” Sinema told reporters after her event. “One of the things that we’ve experienced in the time that I’ve served in the Senate is that big cities tend to get a lot of access and a lot of attention from the federal government but smaller and more rural communities have a harder time breaking through and my goal is to ensure that every single dollar that Arizona is eligible for in the new infrastructure law is accessed by rural Arizona.”

“I’m really thrilled to be here with the leaders of Graham and Greenlee counties,” Sinema said. “I just want you to know I appreciate all the work you do to protect rural Arizona. That means a lot to me . . . I want to make sure that you all know that I am working hard to deliver for eastern Arizona. I appreciate you taking the time to tell me about what’s happening in the towns and cities throughout Arizona and how our office can help on a federal level.”

The stop was part of a statewide crisscrossing tour Sinema is partaking, visiting with local leaders and talking about infrastructure and other issues dear to them. As soon as she completed her stop at the Safford Airport, Sinema boarded her plane for Tucson and she was off like a light switch.

In her opening, Sinema spoke about the Infrastructure Investment and Jobs law she and Arizona’s other senator, Mark Kelly, helped shape. She said a big part of her goal was to make sure the money was spread equitably throughout the state, “to make sure the big guys didn’t get all the money,” Sinema said. “I also want to make sure that communities that power Arizona – from small to large, from east to west, (and) north to south, every community gets its fair share.”

That law will help bring broadband to “every single part” of the state, repair and build bridges and roads, secure investments for Arizona’s water future, and help ease inflation by bringing products to store shops.

“Our law was the result of working together across the aisle, Republicans, and Democrats together to strengthen Arizona’s economy through investments that fuel jobs and fuel opportunity,” Sinema said. “I am here now because I want to work closely with all of you to ensure that Arizona gets every single dollar that we are eligible for and that are due from our infrastructure investment.”

Since she was elected to replace outgoing Senator Jeff Flake in November 2018, Sinema has been sort of a “John McCain Maverick” for the Democratic party as she has blazoned her own trail on various occasions, including being one of three Democrats to vote to confirm William Barr as Attorney General in one of her first votes in 2019 to holding out her vote on the Inflation Reduction Act until key parts for drought aid were added and a provision to close the carried interest tax loophole was dropped.

In person, she didn’t disappoint and expressed her independent spirit on more than one occasion while answering questions. She stood firm in her conviction over her stance on the Inflation Reduction Act and expressed gratitude that it concluded.

“It was a hard-fought weekend, I tell ya’,” Sinema told the Gila Herald. “I didn’t get much sleep, but I’m really proud of the fact that this bill delivers for Arizona. In addition to the $4 billion in drought funding that I negotiated into that package, I also am really proud of the work that we did standing up for businesses – small and medium-sized businesses throughout Arizona – to ensure that they’re not facing an increased tax burden. I’m also really proud of the work we did to ensure that manufacturers – who are an important part of Arizona’s future – are not going to be facing huge tax increases. That they’ll continue to do the work that they do for us to implement infrastructure, our chips plus, and, of course, face the changing climate. The investments that this new law will make in turns of addressing a changing climate are incredibly important for Arizona.”

While responding to Eastern Arizona College President Todd Haynie’s query regarding Pell Grants and college tuition, Sinema repelled the notions of loan debt forgiveness and “free tuition” in lieu of an expansion of the Pell Grant system.

“The proposals that you’re hearing kind of from the left about just making college free – it doesn’t make any sense,” Sinema said. “Because what you’re doing is you’re saying its wealthy kids – you know, it’s free for you – which makes no sense – they can afford it; their families can afford it. It makes more sense to say the people who are working class – we’re going to help you get this access to education whether it’s a certificate program that they’re getting through community college. Whether they’re learning to be a welder or a plumber, or whether they’re learning to be a nurse assistant, or whether they’re hoping to transfer to a four-year college, community college is a great place to get that training – whether it’s technical training or whether it’s traditional academic training. But it makes no sense to say we’re going to forgive the loans that people who can afford to pay it. And it doesn’t solve the underlying issue.”

With Graham and Greenlee counties suffering from drought conditions like the rest of the state, water was one of the main topics. While Sinema was happy to tout the addition of $4 billion in water and drought aid for the western states in the Inflation Reduction Act that was passed by the Senate over the weekend, she also was given an update on local water rights issues from Graham County and Safford. Graham County Supervisors Danny Smith and John Howard requested Sinema look into assisting with the San Carlos Apache Reservation regarding the GRIC Water Rights Settlement as part of the Arizona Water Settlements Act of 2004 and the Gila Decree. Howard also spoke of an impending need for new infrastructure along the Gila River.

Sinema spoke about a new water advisory council that was launched Monday and said they will be working with communities around Arizona to collaborate rather than compete for water resources.

While Sinema advised of the impending availability of government monies, the rural town, city, and county governments all are not efficiently prepared to take on the task of applying for the funds. So, Sinema suggested the various communities group together regionally to better compete for grants and funding for projects.

“Our goal is to help bring these regional leaders together, create a regional consortium or working group so that together they identify what are the needs of the community, and then we’re going to provide them with technical assistance and help as they submit these grants,” Sinema said. “Small towns and rural counties often don’t have professional grant writers, I mean, heck, they’ve got one person doing 12 jobs, so our office can help them write these grants. We can help them identify which grants they are available for; we can provide letters of support; help them figure out what’s the best face forward to get access to these grants.”