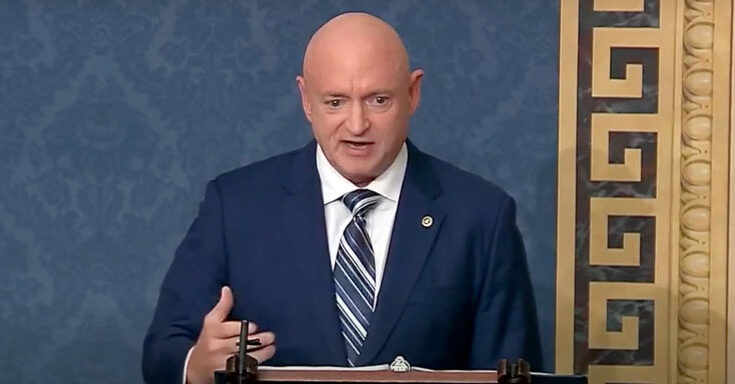 Contributed Photo from video still: Sen. Mark Kelly delivers his first speech on the Senate floor recently. Kelly assisted in the passing of the bipartisan infrastructure legislation in the Senate.

WASHINGTON D.C. – Today Arizona Senator Mark Kelly voted to pass the bipartisan Infrastructure Investment and Jobs Act, a historic investment in our nation’s core infrastructure priorities including roads, bridges, rail, ports of entry, the electric grid, water systems, and high-speed internet. Kelly is one of the 22 members of the Senate bipartisan group that reached a $1.2 trillion infrastructure agreement and was part of working groups made up of Senators to draft specific portions of the legislation, including those focusing on water and power infrastructure, super funds, and brownfields, permitting, and wildfire mitigation.

“Arizonans in every corner of our state are going to benefit from these investments, from expanded high-speed internet access to improved roads and transit options to better security and shorter wait times at our ports of entry,” said Senator Kelly. “As water levels fall in Lakes Mead and Powell and fires burn across our state and the West, I worked to include priorities that will make our state more resilient to drought and wildfires. This legislation is the product of working together, Republicans and Democrats, to find common ground and work out our differences, and the result is going to be historic investments that create high-paying jobs and bring our economy into the future.”

In total, the bill funds:

●      $110 billion to repair bridges and roads and build major highway projects, including unsafe rural roads, $5 billion is expected to go to Arizona for federal-aid highway apportioned programs and $225 million for bridge replacement and repair;

●      $65 billion to expand affordable, high-speed internet access, with at least $100 million expected to go to Arizona;

●      $55 billion for drinking and wastewater infrastructure, with key funding for Arizona programs and projects;

●      $8.3 billion for western water infrastructure, with specific funds going towards repairing aging dams in Arizona and funding the Drought Contingency Plan, among other things;

●      $65 billion to improve grid reliability and resiliency and allow for the increased use of renewables, as well as a Kelly-authored bill to expand the use of energy management initiatives;

●      $8.25 billion for wildfire management, including increasing firefighter pay and a Kelly-authored bill to study and recommend wildland fire prevention, suppression, management, and rehabilitation policies; and

In addition, the following pieces of legislation sponsored or cosponsored by Senator Kelly are included in the bill: The Demand-Response Management Act of 2021; The Wildland Fire Mitigation and Management Commission Act; The ROCKS Act; The Fixing Infrastructure Damaged by Disasters Act; The High Risk Rural Road Safety Act; and The Highway Cost Allocation Study Act of 2021, added via amendment.

For a full breakdown of the Infrastructure Investment and Jobs Act and Senator Kelly’s work on it, click here.

“This bipartisan legislation advanced by Senator Kelly will provide the federal investments needed to modernize and expand our transportation infrastructure in the Valley and across the state,” said Jack Sellers, Maricopa County Board of Supervisors Chairman (District 1) and former Chairman of the Arizona State Transportation Board. “There is no doubt that this down payment on our infrastructure will create a vibrant Arizona economy that not only connects Arizona families and workers to opportunities but also improves our quality of life. I’m grateful to Senator Kelly for connecting throughout this process to ensure we are addressing our critical infrastructure needs in Arizona.”

“Arizona’s farmers and ranchers are experiencing unprecedented challenges due to the drought, which are exacerbated by aging infrastructure,” said Stefanie Smallhouse, president of the Arizona Farm Bureau. “Arizona Farm Bureau has conveyed this message to Senator Kelly and we’re grateful that the Senator kept the needs of Arizona’s farming and ranching families at the forefront of the discussion on this historic bipartisan infrastructure bill. This is a critical investment in the sustainability of Arizona agriculture.”

“CAWCD is extremely grateful for Senator Kelly’s and Senator Sinema’s leadership in securing funding to address the drought in Arizona,” said Terry Goddard, CAP Board of Directors President. “Specifically, CAWCD applauds the inclusion of funding in the pending infrastructure legislation for the Bureau of Reclamation to meet its commitment under the Drought Contingency Plan to create or conserve 100,000 acre-feet of water or more per year to mitigate the impacts of the drought in Lower Colorado River Basin, which includes Arizona. Water conservation protects water supplies, hydropower, and environmental resources in the Lower Colorado River system and is essential as we face shortages impacting CAP water users.”