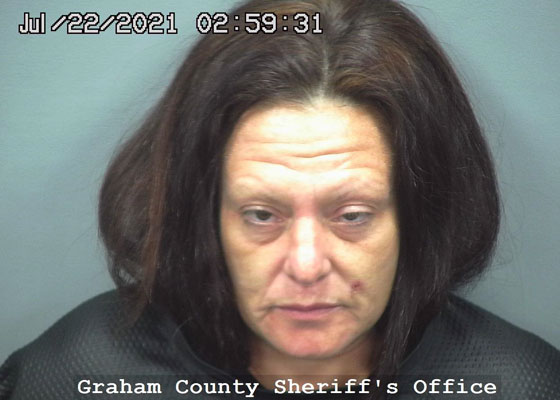 Contributed Photo/Courtesy GCSO: Julia Benavidez, 42, was booked into jail on charges of possession of a narcotic drug, possession of drug paraphernalia, and aggravated DUI.

SAFFORD – A phony call for service regarding a weapons offense at the Graham County Fairgrounds failed to prevent officers from completing a drug traffic stop in late July.

According to reports from the Safford Police Department and Graham County Sheriff’s Office, on July 21, a Safford officer was involved in a drug traffic stop at about 10 p.m. with driver Julia Benavidez, 42, when a call came in regarding a male wearing a white T-shirt threatening to shoot people at the upper ponds at the fairgrounds.

A Sheriff’s Office deputy responded to the fairgrounds and found it to be a false call for service. Attempts to call back the number that called in the weapons violation resulted in negative contact.

However, the call plotted from the 400 block of E. 7th Street in Safford, right across the street from where the Safford officer had stopped Benavidez.

According to the Safford officer’s report, the officer noticed the license plate light was out on an Isuzu Rodeo bearing California license plates. The officer followed the Isuzu as it turned onto 7th Street and then parked. Benavidez quickly exited the vehicle and began walking to a residence when the officer contacted her and asked if her driver’s license was still suspended, according to his report.

After confirming the suspension, the officer proceeded with his traffic stop. Benavidez initially declined consent to search her purse, and while the officer was waiting for another police department’s drug-sniffing dog to arrive, the false call for service at the fairgrounds was made.

While a deputy checked out the fairgrounds, other officers stayed with Benavidez and awaited the drug dog. Upon the canine’s arrival, the dog made a positive alert to Benavidez’s purse, which was then searched and a small amount of heroin was seized.

After being placed under arrest, Benavidez allegedly advised she had intravenously injected heroin earlier that day, prompting a DUI-drug investigation as well. She was later booked into the Graham County Adult Detention Facility on charges of possession of a narcotic drug, possession of drug paraphernalia, and aggravated DUI.

The deputy and officers interviewed several subjects across the street from the traffic stop and checked their cell phones but none matched with the number that called in the weapons offense, according to a GCSO report.