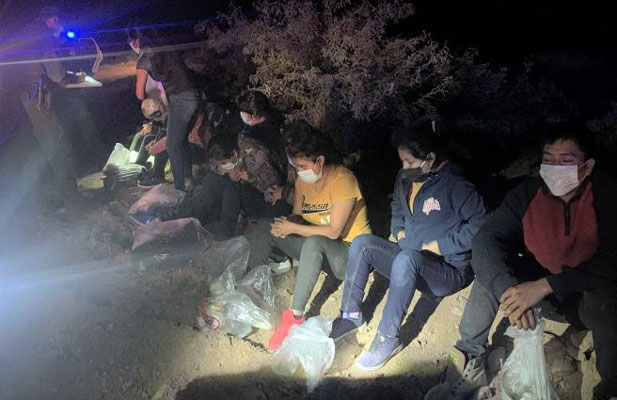 Contributed Photo/Courtesy U.S. Customs and Border Protection: Agents in Douglas arrested 10 illegal aliens who had crossed east of town in an area of border wall construction.

DOUGLAS – U.S. Border Patrol agents arrested 10 Mexican nationals after their vehicle drove into the U.S. near an area under border wall construction, near Douglas on Thursday morning.

At 5:25 a.m., Tucson Sector agents stopped a silver Chevrolet Impala for an immigration inspection on Geronimo Trail Road.  Upon inspection, agents observed seven people inside the sedan, six of them attempting to conceal themselves. Moments later, agents discovered three more inside the trunk.

All persons in the vehicle were immediately provided masks and arrested for illegally entering the United States. At the Douglas Border Patrol Station, records checks revealed that all 10, including the driver, were citizens of Mexico between the ages of 14 and 40-years-old.

During their investigation, agents discovered that the vehicle had crossed the border through a small area of border wall still under construction; utilizing wood boards to drive over the already excavated footings and into the United States.

All ten people in the vehicle were expelled to Mexico under Title 42 authority.