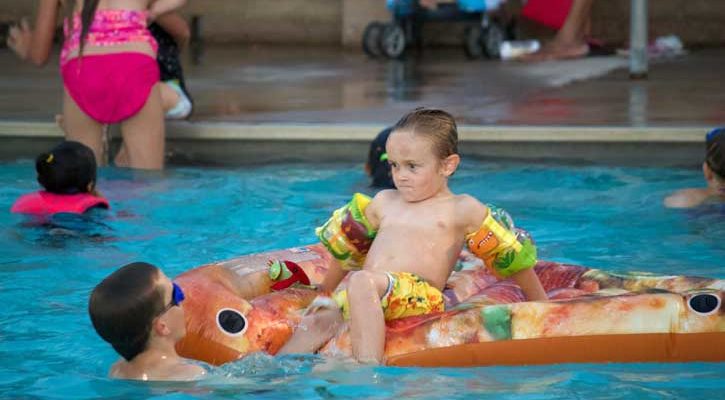 PIMA – The community came out in droves Saturday for an end of summer soiree at the Pima Fire Department’s second annual Big Splash Bash.

For the second year in a row, the band Half-Fast (now with Nathan Salas) had the crowd rockin’ and rollin’ for hours with its unique blend of tunes as the Pima Fire Department served up hamburgers and hotdogs as well as last year’s T-shirts at a discounted price.  The event was held at the Pima Pool and adjacent park.

“We enjoy doing this a lot,” said Half-Fast lead singer Vernon Batty. “This is a lot of fun, and the crowd was great.”

Sofia Rawls brought her children to the event and enjoyed the music while getting some dinner.

“It’s pretty nice,” she said. “It’s a great activity for the kids.”

While Mother Nature played nice, having the Pima Pool open for free still influenced a large number to get in one more swim before the end of the season. Smiles were rampant as children jumped and splashed with friends.

Brett Innes, 6, of Pima, brought a giant pizza floaty to play with at the pool and said his favorite part of the event was the swimming.

Organizer Lavan Taylor said he was pleased with how the evening progressed.

“It looks like they’re having a lot of fun,” Taylor said.

He told the Gila Herald that his favorite part of the event was “just seeing all the community come together and everybody enjoying this pretty nice weather right now.”

The Big Splash Bash’s aptly named competition came down to a serious battle in the various age groups, with Miles Taylor, 6, Milo Raley, 10, and R.J. Morales taking home the honors in the children’s age divisions. Morales had a stiff battle and had to jump three times before defeating Kamea Nelson, with Ambrosia Johnson finishing in third.

In the adult division, Pima firefighter Donny Solis was crowned champion after blowing up the pool with his jackknife off the high dive. While the youth competitors all received a pair of goggles or mask as prizes, Solis took home a cooler as the Big Splash Bash adult champion.

All proceeds from the event’s sale items will benefit the Pima Fire Department’s recreation fund.