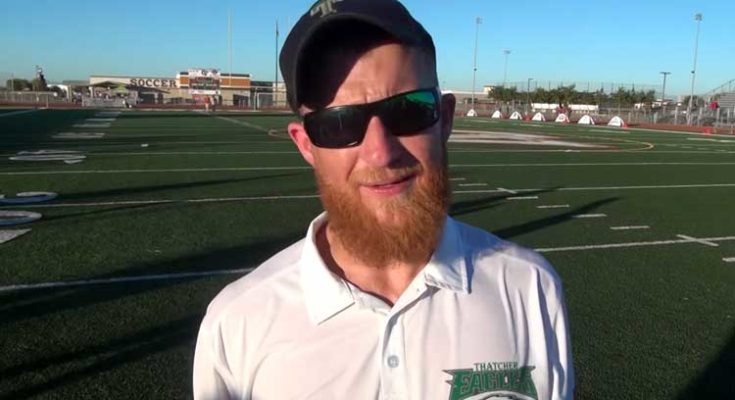 THATCHER – The Thatcher Eagles’ quest for a three-peat got a little bit more interesting Tuesday as head coach Sean Hinton was removed from the team.

Sources indicate Hinton has succumbed to a substance addiction and is seeking help with drug rehabilitation. Citing personnel privacy laws, that information has not been corroborated by Thatcher Schools. Sean Hinton could not be reached by the Gila Herald for comment.

“Coach Morales has (more than) 30 years of coaching experience at Thatcher USD and we are extremely confident he will continue the proud tradition of Thatcher Eagles football,” Spiller said.

Dr. Spiller said while he wouldn’t elaborate on why Hinton was replaced, he said he made the decision after meeting with Morales on Monday.

“I had a good visit with him (Morales),” Spiller said. “He’s excited and has a great rapport with the kids. I think he knows what we stand for and his experience and his stability is exactly what our kids need as we pursue a third straight state championship.”

After graduating college, Hinton returned to the Gila Valley and joined the Fort Thomas High School football team staff and was the boys head basketball coach.

Thatcher soon came calling, however, and Hinton signed on to teach physical education and weights at the high school while taking the reigns of its football program as its head coach in 2015.

At this time, Hinton is still employed at the Thatcher High School as its physical education teacher and weights teacher, according to Spiller.