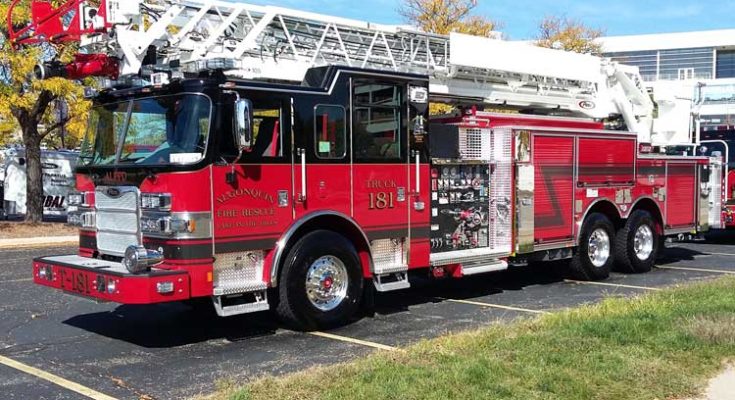 The Safford Fire Department will receive a ladder firetruck like the one pictured above.

SAFFORD – Come this time next year, the area will have two ladder firetrucks at the disposal of local fire departments.

At its Monday meeting, the Safford City Council was informed that the city would move forward with the purchase of a $1.2 million stick ladder firetruck with a 107-foot ladder instead of a previously-approved pumper truck for $800,000. The pumper truck was scheduled to be financed over a 10-year period and Safford will now utilize the same financing but for roughly a 13-year period to cover the difference in price.

City Manager Horatio Skeete told the council that in discussions with the truck manufacturer, the thought came up that the fire department could utilize a ladder truck even more than another pumper truck and that it would fit in its existing station. With firetrucks lasting about 25 years, Skeete said the time was now or never to move on the item.

“We got the brilliant idea that this opportunity will probably not present itself for a long time,” Skeete said.

Fire Chief Clark Bingham and Assistant Fire Chief Patrick Anderson presented to the council and answered the members’ questions regarding the truck. Bingham said the 107-foot length would reach three-story buildings and that with Thatcher already having a platform ladder truck available in emergencies, having a stick ladder truck made the most sense. Additionally, the stick ladder truck, which has a telescoping ladder that firefighters can climb up and down for rescues, is roughly 20 percent cheaper than a platform ladder truck.

“The ladder offers you removing building restrictions,” Bingham said. “If anyone wants to build bigger hotels or apartment complexes the height limit will now be able to be taken away.”

Bingham advised that the ladder truck would also bump up the department’s firefighting classification and gives good breathing room for the community to expand.

The firetruck is built on paper but will take roughly 10 to 12 months to actually build and deliver, according to Bingham. The manufacturer will then spend three days training the fire department members on how to operate the vehicle.