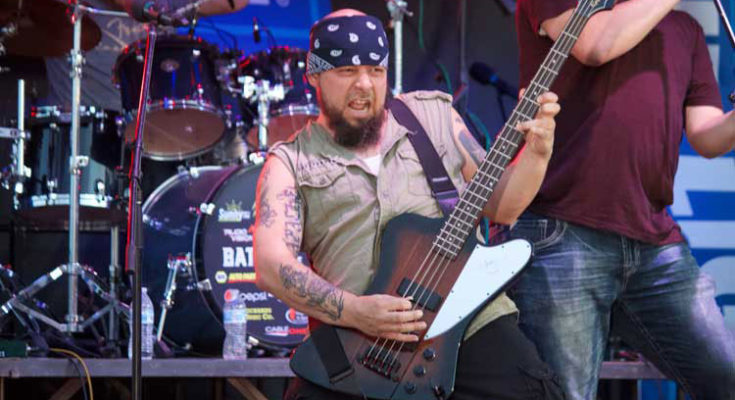 Jon Johnson File Photo/Gila Herald: Nathan Salas plays a variety of instruments and formerly jammed on bass in the group “Half-Fast”. Salas recently signed a record deal with Pavement Entertainment with the new band he is in “Fire Glass”, out of Tucson.

SAFFORD – When Nathan “Besh” Salas came to Safford from Colorado the plan was simple; open his studio, Lab Audio – check, join a band – check, get signed to a record deal. Wait, what?

While that last to-do item took years of work and joining a band from Tucson, “Fire Glass”, Salas and the rest of the group recently inked their deal with world-renown Pavement Entertainment and have begun recording their five-song EP at Lab Audio Studios in Safford.

“Originally when I came here I was on tour with a band called “Born in Winter” out of Denver,” Salas said. “And when I moved here I thought, ‘well, I’ll just get another band together and everything will be good.’ And then I found out that there’s a lot of great musicians in this area, but not all of them like heavy metal. And so I had a hard time finding people who had that like-minded approach to music and what I wanted to do creatively.”

So, Salas started looking outside the area and began playing with the band “Dedwin” out of Tucson. While playing with them, he was introduced to Fire Glass and eventually ended up trying out for the band. Not to be outdone, Salas learned more than the required songs for the audition and wrote four songs as well.

After joining Fire Glass, things began to move quickly and in December 2019 Pavement Entertainment came calling. After about six months of negotiations, the sides came to terms and signed a deal.

“It’s an awesome opportunity to reach people globally,” Salas said. “We’re very proud of the fact that a small part of that came out of the Safford area as well.”

Salas said he normally travels to Tucson twice a week for band practice, but now the shoe is on the other foot for the rest of the band as they are traveling to Safford to work on their five-song self-titled EP that is currently being recorded at Lab Audio Studios.

“It’s kind of neat,” Salas said. “In little Safford, Arizona, we’re going to record this five-song EP for Pavement in our little project studio in Safford.”

You might know Salas from his jamming with his former self-titled band “Lab Audio” or from when he slid onto bass to rock out with “Half-Fast” at local events and the annual Battle of the Bands show at the Graham County Fairgrounds. However, for his full-time job, he runs Lab Audio Studios.

Salas has been operating Lab Audio Studios for 20 years, with the past five being done in Safford. He is joined in that occupation with his better half, Amy McLain, who serves not only as his direct agent/assistant but also as the CEO/CFO of Lab Audio Studios.

Lab Audio is a full-service recording studio and works with a lot of local youth with music lessons for a variety of instruments. However, the small project studio also has jobs that span the globe for commercials, schools, and Foley sound effects for movies. Foley is the reproduction of sound effects that are added to media post-production to enhance the audio quality.

“I question whether or not my neighbors think I’m sane or not,” Salas said. “Because if I’m out there capturing anything I’ve got these big cans (earphones) on my head and recording devices and I’m stepping into gravel or pouring water and doing different things.”

Learn more about Lab Audio by visiting its Facebook page or check out its YouTube channel as well.

Fire Glass is a rap/metal band out of Tucson originally formed in October 2012. After going through a variety of lineup changes, current members include Nathan “Besh” Salas on guitar, founding member Matt “Lunatic” Mier on bass, Matt “Twitch” Wineinger on drums, with Daniel “Break”, and Russ “Riot” on vocals. They are managed by World of Music Artist Management and are booked by Wavelink Agency.

Popular songs by Fire Glass include “What’s Done is Done” and “Red Rum”.

Those songs were done prior to Salas joining the band and any new material is just what the group is currently working on at Lab Audio Studios.
“We’re very proud to have a history and a culture of other people who have been in the band before us,” Salas said. “We pay a lot of respect to them. They’re all very excited that things have happened. It’s kind of one big family.”

While Fire Glass is expected to go on tour in support of the EP in January 2020 – starting in Tucson and Phoenix – the first chance to see the group live will come earlier than that as they will be on the bill at Club Red on Friday, July 31, in support of the band Devil Lies Down’s album release party for “Through the Blackout.” Club Red is located at 1306 W. University Dr. in Mesa. The doors will open at 6 p.m. for this show.

“We have a legitimate shot,” Salas said. “We have all the backing of an amazing team; a great management team; a great online team and the monolith of Pavement behind us to kind of push us forward. (However), right now, it’s still a grassroots movement.”