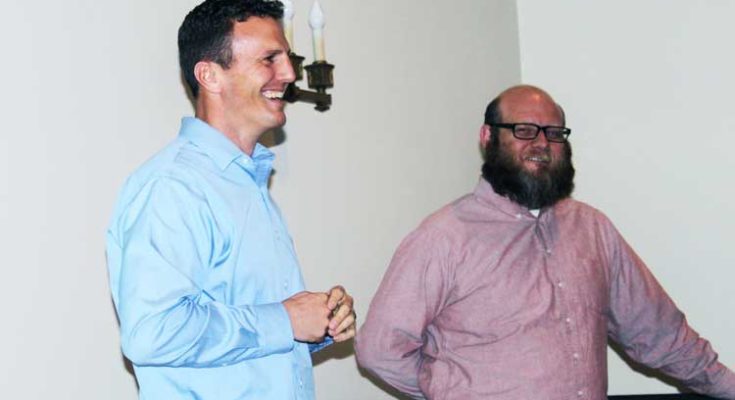 Looks to bring art and culture to area

In rural communities throughout the nation, the arrival of big box stores such as Walmart has eventually caused the demise of Downtown “Mom and Pop” stores. Coupled now with the clickable availability of most things on Amazon (founder and CEO Jeff Bezos didn’t become the wealthiest man in the world by not taking over retail) it is necessary more now than ever for Downtowns to “weather the downturn” as Crummey put it and create a space where strong communities can thrive.

Crummey was the featured speaker at Safford’s Downtown Vision Plan Update Community Forum Wednesday night as part of a two-day series of events regarding creating a thriving Downtown. The event was sponsored by the Safford Downtown Association and the city of Safford.

Crummey detailed lessons he learned while working on Mesa’s Downtown, turning it into a destination people wanted to go again, in part by improving the look of the physical space and bringing art and culture to the forefront.

A number of items Crummey listed Downtowns can do are already ongoing in Safford, which has several popular Downtown events each year, hosts movie nights and has improved the facades of several buildings. Businesses such as Creative Flow Studios have brightened the space with colorful paint jobs and renovation, and Richard’s Music Co. has rebuilt its building next door for a brand new location.

Back on March 24, 2008, the Safford City Council was shown what a vision of Downtown could look like if plans from a charrette study were implemented. In urban planning, the term charrette refers to collaborative design/input sessions with as many parties as possible.

At that time, then City Planner/Downtown Coordinator Dustin Welker gave a presentation to the council regarding the study, which included property usage, streetscape improvements, design codes, and parking.

The city and Downtown have implemented a good number of ideas that were in the study. On Wednesday, Welker, who is currently the Safford Planning and Community Development Director but was recently announced as the choice to succeed Terry Cooper as Graham County Manager, said this meeting was to see how they could move forward in the next phase.

“We’re looking for the next steps to improve Downtown and all of our options as far as painting or improvements on buildings and even murals that are done properly,” Welker said. “We’re excited about improving the Downtown and the aesthetics of it through art.”

Graham County Board of Supervisor Chairman and Safford Downtown Association President Danny Smith was also at the meeting. Smith has long been involved with the Downtown revitalization and was on the Safford City Council when the charrette study was commissioned. Recently, he has spearheaded the Safford Theatre restoration project to turn it into an open-air facility while keeping its facade.

He said it was important to update the vision plan because the old one was now outdated.

“One of the things we feel is important moving forward with this new plan is having art Downtown,” Smith said.

The new vision plan will follow how the old one went and an implementation plan will be put in place to follow for the next 10 years, according to Smith.

While it is possible to purchase items with a click or do a one-stop shop at Walmart, those options lack an interaction with the community and don’t have the cultural aesthetic that planners are envisioning for Downtown. A bustling Downtown full of people shopping and eating at restaurants, enjoying the facilities and special events is what planners are working to accomplish, and with their great effort and the cooperation of businesses and landowners, such a vision is on its way to becoming a reality.