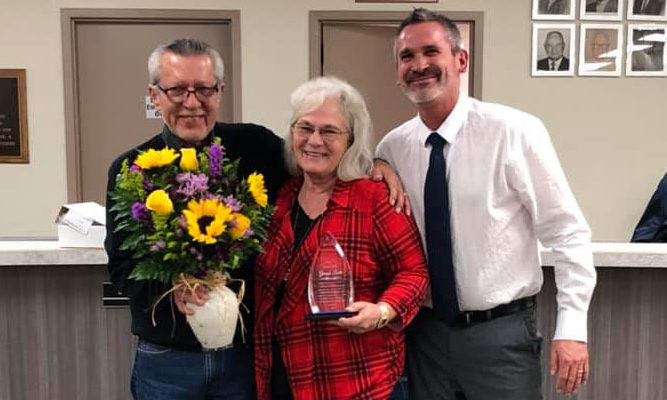 “If I can find my little corner in the world with pine trees and my cattle, I’ll be happy.”

SAFFORD – Over the past 26 years, Georgia Luster has seen it all as the Safford City Clerk. She has been privy to the scandals, the triumphs, the failures, and the progression of the city. And now, the city will lose some of its shine as it loses its Luster.

Luster was recognized for her longtime service at the Safford City Council meeting Monday night and was awarded a plaque and flowers from Mayor Jason Kouts and Vice Mayor Richard Ortega.

After 26 years in the driver’s seat as City Clerk, she has taken the last few months to help train her replacement and will officially have her last day Jan. 2, 2020. She said one of the things she will miss is the daily interaction with the public.

“I love the people,” Luster told the Gila Herald. “(I love) just being able to help the people. I enjoyed my job and I enjoyed the people I worked with. I really did.”

“Most definitely she will be missed,” Skeete wrote. “She is the most competent City Clerk I have ever worked with in the past 28 years.”

Graham County Supervisor Danny Smith, who previously served on the Safford City Council, also chimed in with his thoughts.

“We had some wild times and great laughs together,” Smith wrote. “Nuttiness was always surely tempered by your fair, knowledgeable and steady management of the clerk’s office.”

Luster said her enjoyment for her job made it hard to retire but she is looking forward to seeing how life will be moving forward. She also reminisced about her many years of service.

“I’ve had the opportunity to work with many different people and have gotten some good friendships out of a lot of them,” Luster said. “I’ve enjoyed it. It’s been fun, and I can’t believe it’s come to an end. It’s been a wonderful job. I’ve had lots of opportunities, and I’ve really appreciated it. I’m really grateful for those opportunities to grow.”

In other council news:

Mayor Jason Kouts and Vice Mayor Richard Ortega accepted a $1,000 check from Southeastern Arizona Clean and Beautiful (SEACAB) Chairman Tim Linden for a water refill station to be placed on the multi-use path at U.S. Highway 191 and the Safford Cemetery loop so trail users can refill water bottles.