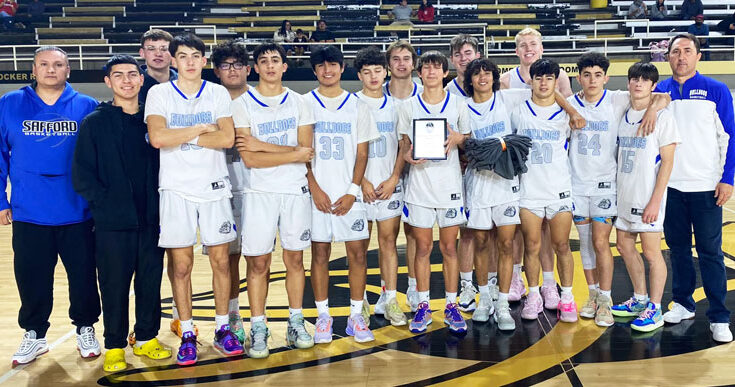 EAGAR – The Safford Bulldogs boys basketball team braved the great white north and battled hard to finish as tournament runner-up to champion Holbrook in the Round Valley Roundball Shootout on Saturday.

“The boys are willing to play hard with great enthusiasm and confidence and (are) getting better,” said head coach Danny Smith. “I would say we won the games we were supposed to win and they earned our other wins. One of the wins was completely player led as a result of our game plan which is the best type of team. Credit Holbrook. Holbrook is really good, and I expect they will go a long way this season.”

On Thursday, Safford defeated the San Carlos Braves 61-50 in its first game but fell to the Holbrook Roadrunners 51-66 in the second game of the day.

The Bulldogs then worked their way back up with a 61-53 victory over the Mogollon Mustangs on Friday, and a tough, 67-65 victory over the Benson Bobcats on  Saturday morning to put Safford in the championship game.

There, the Bulldogs ran into the tough Holbrook Roadrunners again. Holbrook held Safford off for the championship, 65-35.

The Safford girls basketball team faced stiff competition at the Round Valley Shootout and finished 1-4.