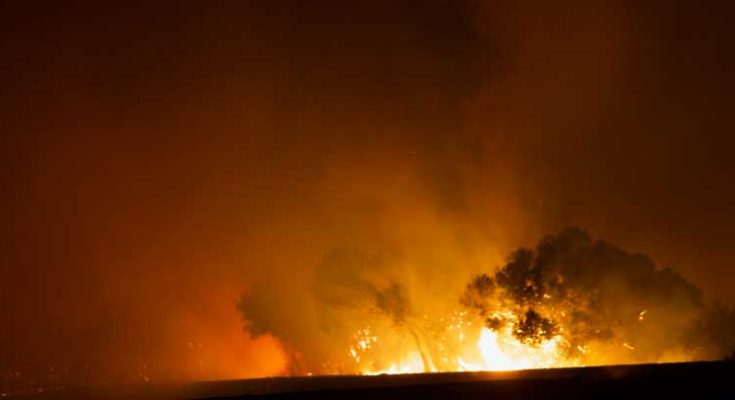 Photo By Scottie Walker: A wildland fire that spread eastward next to the Gila River in Safford throughout Monday night into Tuesday morning has been taken under control.

SAFFORD – A wildland fire along the Gila River that was visible from Pima to Solomon was taken under control by the diligence of the volunteer Safford Fire Department and crews from the Bureau of Land Management early Tuesday morning.

The fire began shortly after 9 p.m. along the riverbed about a quarter-mile west of 20th Avenue. With no natural causes evident, the fire was most likely human-caused. There reportedly is a homeless camp in the area where the fire started, but no official cause has been made. There were no reported injuries.

The Safford Fire Department was dispatched at about 9:15 p.m., but found itself quickly in trouble as high winds and extremely dry fuel allowed the fire to jump an eighth of a mile at a time.

“It wasn’t safe where our initial attack point was, so we pulled back and let it kind of run it’s course and found a defendable spot,” said Safford Fire Chief Clark Bingham. “When we initially got called, it was jumping an eighth of a mile, a quarter-mile on us pretty quick. There was nothing we could do to stop that.”

Early Tuesday morning, the winds died down and became favorable to the fight as Safford Fire located a natural fire break of a drainage and a road and managed to keep the blaze at bay there. At the same time, BLM crews found a break at the north and stopped it from spreading that way. With the east end also pretty much contained around the 14th Avenue area, Safford Fire left the area at about 1 a.m. and turned the fire over to BLM, which continued to work it throughout the night. Tuesday morning, the BLM turned the fire over to State Land, which has crews such as the Ft. Grant Prison fire crew mop up the existing hot spots. State Land and the BLM were still conducting burnouts as of 12:30 p.m. on Tuesday, but the fire was reported to be contained.

“They’re going to continue to clear brush and let it burn itself out,” Bingham said.

A cotton field to the south was a natural break for the fire, and the field did not suffer any damage, according to Bingham. Additionally, Safford Fire had plans to protect the Safford Wastewater Treatment Facility and utility poles in the area that were encroached by the fire but were not damaged.

A Forest Service truck reportedly got stuck in some deep, soft sand and so did a tow truck sent to retrieve it. Additional tow vehicles were then sent to free both vehicles.

While it was scary and could have been detrimental, through the diligence of the firefighters with Safford, BLM, and the Forest Service, the fire was contained and turned into a beneficial burning of brush along the riverbed.

“Fire is a natural thing that occurs and it’s a good thing to clear out that brush,” Bingham said. However, he agreed that it was because of the firefighting efforts that it was beneficial.

“BLM, the Forest Service, and Safford Fire did a really, really good job,” Bingham said. “All the crews did really good.”

The video report below was first posted late Monday night.