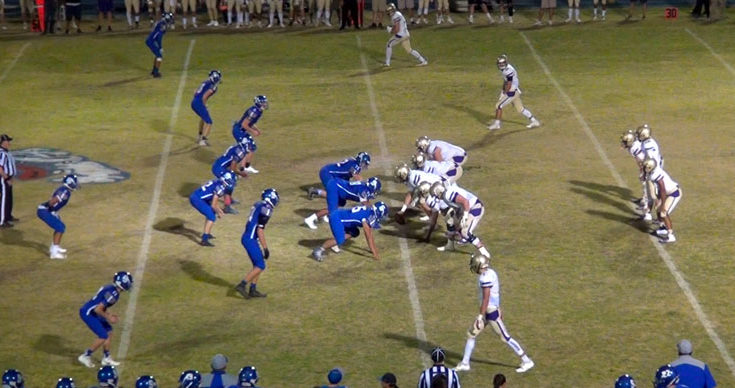 Jon Johnson Photo/Gila Herald: Sabino held off a late drive by Safford to capture the regional championship with a 20-17 victory.

SAFFORD – It was there. The 3A South Region title was within grasp for the Bulldogs as they pounded Sabino’s tired defensive line with run after run as the clock ticked down late in the fourth quarter. It was there, and then it was gone.

Three offensive holding penalties and a last-second surge by that beleaguered defensive line stopped Safford on 4th-and-short just outside the 10-yard-line, and Sabino held onto the victory, 20-17.

The Bulldogs were certainly in the range of the sure-footed Justin Torrio, but perhaps the team felt even more confident in its ability to convert into a first down and get into the end zone for the win.

The Sabercats (5-0 region, 7-0 conference, 8-2 overall) came back from a 17-13 halftime deficit to shutout the Bulldogs (4-1 region, 6-3 conference, 6-4 overall) from scoring in the second half while finding the end zone with running back Jamel Brown’s third rushing touchdown of the game.

“That was just two evenly-matched teams,” said Sabino second-year head coach Ryan McBrayer. “These guys (Safford) battled all the way to the end. They made some great plays. They made it tough, but our guys just dug a little bit deep and pulled out the win.”

Sabino looked every bit the regional champion on its first drive as its first two screen-pass plays put them into Safford territory.

The Sabercats’ passing game brought the ball to the Bulldogs’ 1-yard line, and Brown punched it in from there for the first of his three touchdowns on the night.

The Bulldogs’ drive stalled in no man’s land – too far for a field goal try and too close for a normal punt – and they turned the ball over on downs on their first possession. The defense then perked up, however, and caused a 3-and-out by the Sabercats to get the ball right back.

Safford then methodically worked the ball down the field for the rest of the first quarter behind runs from quarterback Jerick Arbizo and running backs C.J. Scrivner and Samuel Tobias.

However, the Bulldogs faced 4-and-19 from the 20 and first-year head coach Eric Hjalmarson inserted former starting quarterback Mason Duros into the lineup. The changeup worked as Duros found Arbizo flaring out to the right in the end zone for a 20-yard TD.

Then it was the defense’s turn. On the ensuing Sabercats’ possession, Justin Torrio jumped a screen pass from A.J. Skaggs and deflected it into the waiting hands of Samuel Tobias, who then took it the distance 43 yards to the house for the pick-six. Torrio’s extra-point attempt was good and Safford had their first lead of the night, 14-7, early in the second quarter.

The Sabercats’ passing game brought them right back, however, and after a big pass play from Skaggs to Logan Szarek, Brown once-again finished the drive, this time with a 3-yard TD plunge. The extra-point attempt went wide right, however, and Safford still led 14-13.

The ensuing kickoff was mishandled, and the Bulldogs had to start their drive from their own 6-yard line.

Scrivner gave the offense some breathing room and more with a big run out past the 40-yard-line, and four big runs by Arbizo brought the ball to the 5-yard line as time started to run out in the second quarter.

Arbizo too one shot into the end zone, but Tobias just couldn’t corral the pass. With 10 seconds left, Hjalmarson then elected to send out the field goal unit on third down, and Torrio drilled a 23-yard kick straight through the uprights to give Safford a 17-13 lead at halftime. Hjalmarson was not available for comment after the game.

The second half’s only score came after Skaggs hit Szarek over the middle for a big play all the way down to the Bulldogs’ 6-yard line. Like clockwork, Brown then ran it in from 6 yards to put Sabino up 20-17.

The Bulldogs recovered two fumbles in the second half but were unable to convert them into points. Safford’s second-half included two punts and three turnovers on downs.

“It was a good game,” Arbizo said. “They have big linemen and (it was) pretty tough running, but we’ll see them again in the playoffs (and) we’ll get them.”

The No. 10 Bulldogs will first have to travel to Buckeye and get by the No. 7 Odyssey Institute Minotaurs (2-2 region, 8-2 conference, 8-2 overall). That game is Friday, Nov. 2, starting at 2 p.m. To see an article on playoff seeding for the local teams click here.