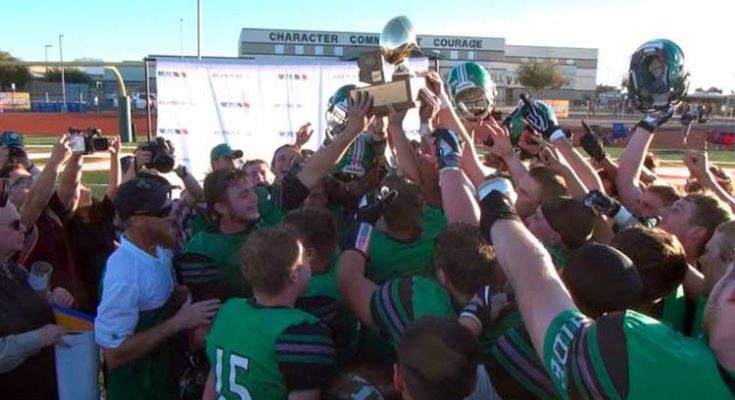 Jon Johnson File Photo/Gila Herald: The Thatcher Eagles celebrate their second straight championship. The Eagles will fly toward a third championship with the No. 1-seed after finishing the regular season unbeaten.

Thatcher looks to three-peat, while Morenci and Safford look to make a splash

PHOENIX – The playoff brackets are set and area teams of Thatcher, Morenci, Pima, and Safford look to put their mark against the best of the rest of the state. First-round games will take place Friday, Nov. 2 at 7 p.m.

No. 1 Thatcher (4-0 region, 7-0 conference, 10-0 overall) completed its perfect season Friday night with a cruise-control victory over the hapless Santa Rita Eagles and will host its first playoff game against No. 16 North Pointe Prep (4-1 region, 8-2 conference, 8-2 overall) at Eastern Arizona College.

The Eagles are the No.-1 ranked team in the state and are the favorite to win it all. The victory would be the third straight 2A Championship title for Thatcher. If the Eagles win their first round game they will host their second-round game as well, on Friday, Nov. 9 at 7 p.m. The way the brackets are set, Thatcher could see a rematch against No. 3 Round Valley in the state championship game.

No. 4 Morenci (2-2 region, 7-2 conference, 8-2 overall) lost its first game of the season to Thatcher (15-0) and would like nothing better than to end the Eagles’ season in a rematch during the playoffs.

The Wildcats could see a matchup against Thatcher in the semifinals if both teams reach that spot. Morenci will first have to deal with No. 13 Parker (3-1 region, 5-1 conference, 6-3 overall) at Morenci High School.

If Morenci wins its first-round game it will host its second-round game against either No. 5 Phoenix Christian or No. 12 Scottsdale Christian. With Morenci finishing third in the 2A Black Region and getting a No.4-seed shows how tough the region is and how respected the top teams are as well. Every 2A Black Region team made the playoffs. A possible second-round matchup against Phoenix Christian could be the game of the playoffs.

No. 10 Safford (4-1 region, 6-3 conference, 6-4 overall) just missed being regional champions Friday night with a tough loss to Sabino (20-17) and will start its 3A playoff voyage on the road at The Odyssey for Advanced International Studies in Buckeye against the No. 7 Odyssey Institute Minotaurs (2-2 region, 8-2 conference, 8-2 overall. The Minotaurs’ coach is in his first year and his daughter is the team’s kicker.

If Safford gets it done in the first round, it will be rewarded by likely having to travel to the westernmost part of the state to play No. 2 Yuma Catholic in the second round.