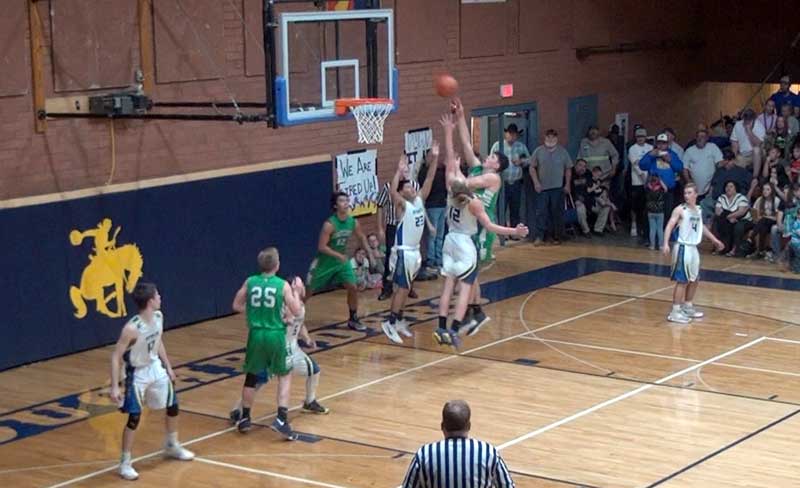 Pima’s Dawson Pruszynski had a battle all night down low with Cole Motes of Thatcher. While the two mostly canceled each other out, Pruszynski, like his team, came out ahead in the points department, outscoring Motes, 14 to 6.

The star of the night had to be Pima’s senior point guard Trey Thompson, who lived up to his name by hitting for 3 twice in the second period, including a buzzer beater to go into halftime. Thompson, who finished with a game-high 28 points, also showed off his mid-range game with several jumpers in the face of tight defense and must have hidden some roller skates in his shoes as he glided past defenders multiple times on his way to layups throughout the game.

“Obviously, Dawson got a lot of attention, which allowed me to be able to work in space,” Trey Thompson said. “It also helps a lot Frank (Gutierrez) being able to shoot.”

Things started out well for Thatcher, who took an opening lead as Trenton Ferrin ran through a back cut and hit on the Eagles’ first shot of the night. Later in the first, Thatcher’s cool-shooting Brock Layton and the versatile Matthew Palmer both hit 3’s and Motes had a rebound putback that gave the Eagles an early lead, 15-9.

“Thatcher came out and played really good with a lot of energy in the first quarter and they knocked down some shots,” Cliff Thompson said. “They made it tough on us in that first quarter; they had the lead on us but then we got after them.”

With the game tied at 15 in the second period, Palmer got tangled up with Pima’s Manny Rivera, who was attempting a steal. Palmer had some words for Rivera and got called for a technical foul, which resulted in two free throws for Thompson and the ball returning to Pima, which never looked back.

As Thatcher struggled offensively in the second period, Pima flourished with a 3 by Frank Gutierrez and the two long balls from Trey Thompson as Pima went into halftime up 28-16.

Thatcher made a game of it in the third period by connecting on 3’s by Michael Greer and Palmer to cut Pima’s lead to six points, but Pruszynski stepped out for a 3 of his own and began to drive the ball hard into the heart of Thatcher’s defense. By the time Andrew Taylor hit a crowd-pleasing deep 3-pointer from the parking lot as time expired in the third, Pima was up 43-24.

The fourth period continued to go Pima’s way as Trey Thompson slashed and dashed his way to the hoop. Thatcher began to intentionally foul with 5:15 left in the game, and Pima missed the front end of three straight one-and-one attempts.

Thatcher only marginally recovered, however, and the Roughriders rode off with the win, 55-36.

“I think we played with our heads really well in the second half,” Cliff Thompson said. “We were patient on offense (and) still brought the defensive pressure. I’m really happy with the way our team responded.”

“Pima is really good,” Riehemann said. “We knew it would take a special night to come in here not just to compete with them but to come in here and win it was going to take a special effort . . . There’s a good chance we’ll see them again somewhere down the line here coming up in the next couple of weeks and, hopefully, we’ll progress a little bit further along and make a little bit better opponent.”

Pima will host the Tombstone Yellow Jackets on Tuesday, Jan. 30 and then finish up its regular season at home Thursday, Feb. 1 against the Benson Bobcats.

Thatcher travels to do battle with the Morenci Wildcats on Tuesday, Jan. 30 and will finish up the regular season at home against the Willcox Cowboys on Thursday, Feb. 2.

The Safford Bulldogs went toe-to-toe with the Globe Tigers on Friday and emerged from overtime with an 86-80 victory.

Safford head coach Terry Williams told Gila Valley News after their game against Pima on Thursday that if they could hold Globe’s superstar scorer Robert Burries under 40 points they would have a chance. Well, Burries had “only” 21 points (his teammate Braden Dalton led the team with 27) and Safford had an eight-point lead heading into the fourth period.

Globe came back to force overtime, but Safford took over in the extra period by outscoring Globe by six.