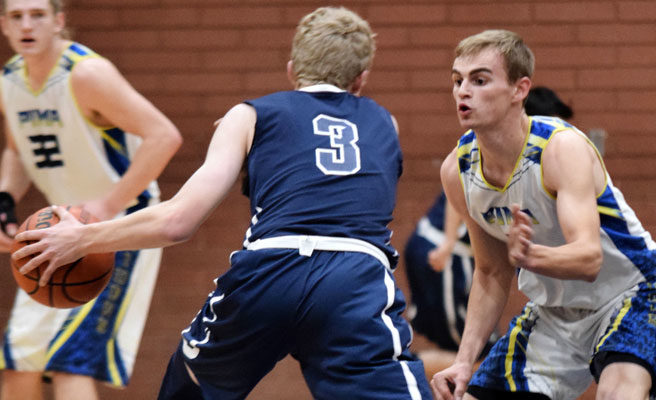 PIMA – The Cliff Thompson-coached No. 12 Pima Roughriders ousted the No. 21 Scottsdale Prep Spartans 53-41 during a play-in round pairing Wednesday, Feb. 13.

Scottsdale Prep was the No. 4 Central Region entrant in the state post-season and joined the other members in being eliminated. Region top seed and No. 11 ranked Camp Verde was upset 76-72 by No. 22 Gilbert Classical, region second seed and No. 20 ranked Glendale Prep fell 58-48 to No. 13 Phoenix Country Day School, and region No. 3 and No. 24 ranked Flagstaff Northland Prep fell 65-30 to No. 9 Scottsdale Rancho Solano Prep.

Instead of facing No. 5 Morenci (No. 1 East) in the next round, No. 11 Pima (No. 3 East) goes up against the No. 6 Tucson Saint Augustine Catholic Wolves (No. 2 South) on the Yavapai Community College campus at 9 a.m., Morenci faces the No. 12 Phoenix Country Day School Eagles (No. 3 Metro) on the YCC campus at 3 p.m., and No. 4 Thatcher draws the No. 13 Chandler Prep Titans (No. 1 Valley) on the Prescott Valley Bradshaw Mountain campus at 3 p.m.

The Roughriders broke the games’ final tie and took the lead for good, 25-23, on a pair of Dawson Pruszynski free throws with 6:33 left in the third period. A rebounded missed second free throw and put back with 1:01 left in the period gave the Roughriders a 4-point advantage.

The initial run started after a controversial turnover where a Pima player appeared tipped the ball, which then also hit a Scottsdale player and bounded into Pima’s side of the court. The ref turned the ball over to Pima on a backcourt violation, much to the dismay of Scottsdale Prep head coach Mark Owens, who insisted the referee made the wrong call. The game was intense enough for Pima head coach Cliff Thompson to need a refresher afterward.