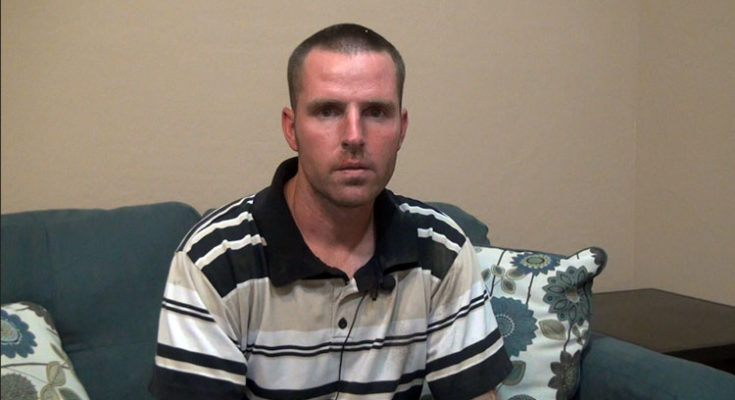 Jon Johnson Photo/Gila Herald: The Gila Herald sat down with Ryan Blan and learned of the difficulty one goes through trying to support a family in a rural setting when their driver’s license has been suspended.

SAFFORD – Recently, the Gila Herald ran an article detailing a man’s history of charges regarding driving on a suspended/revoked license for the past 15 years. (Gila Herald: Man drives without license for 15 years – June 23, 2019)

In that case, the man in question, Ryan Blan, said that his driving issues began with a legitimate DUI-drug charge for driving while under the influence of marijuana in Yavapai County in 2004 when he was only 20-years-old. However, he said he was then pulled over by the same officer two weeks later for driving on a suspended license and since the officer knew he had marijuana in his system previously, the officer took urine as well as blood and the urine specimen came back with a marijuana metabolite, which then warranted an aggravated DUI-drug charge. While cannabis metabolites will only last hours in blood and is a legitimate way to determine a driver’s possible impairment, the metabolite can stay in a user’s urine for up to a month, thereby having someone who may have used marijuana weeks ago still be guilty of a DUI-drug charge even though they may not be impaired.

Blan said he served jail time and 1.5 years in prison

“Since then, it’s been a struggle,” Blan said. “I’ve lost every vehicle I’ve ever owned and just making it to work has been a nightmare . . . I would like for this issue to be brought to light as far as people in rural communities to have another option. If there’s no public transportation, then how do they expect people to provide for their families? I’m the sole provider in my family, and if I don’t do it, who will?”

Blan moved to Graham County after being released from prison but found making a living while having his license suspended was not an easy task to accomplish in a rural area with no public transportation.

“Back then, I was almost a child still and I never would have thought that what I was doing that day or at that time was going to affect my life now in my mid-30s and trying to take care of a family. It’s not been easy . . . In a town without (any) public transportation, it would make sense that a work permit would be given (for) people in my situation.”

Attorney David Griffith explained that people charged with a DUI often don’t realize the possible severe consequences and believe the judge has more discretion than a judge actually has. In fact, if a person pleads guilty to an extreme DUI, the judge must sentence that person to 30 days in jail. While the Motor Vehicle Division (MVD) suspends a driver’s license for a normal DUI for 90 days with a permit to drive to work, school, or medical appointments allowed after 30 days. However, a DUI-drug charge suspends a driver’s license for one year.

“That’s really an issue for a lot of my clients,” Griffith said. “Especially with a DUI-drug, you want to negotiate something different. Usually, the worst thing someone can do is just go in and plead guilty just after seeing the judge and getting charged. What they need to do is talk to a lawyer so they can know all of their options. In this rural community . . . there’s not much taxi service (and) there’s no public bus, so it’s a serious issue.”

“The Motor Vehicle Division is their own entity and they make and change rules all the time,” Griffith said. “So, you have to stay in contact with MVD. Depending on your situation, you gotta get your counseling done and pay your fines, and then you can get your driver’s license back. But it’s a long, difficult road. And it’s really tough on people in rural communities like ours.”

Griffith advised that, in the end, to get one’s license back will ultimately be up to the MVD and what it rules on a case-by-case basis.

“It’s going to be up to (the) Motor Vehicle Division on what they want to do and how long your suspension is going to be. All you can do is work with them and see what you need to do.”

After years of working as a contractor, Blan has opened his own manufacturing business providing faux stone facade to homebuilders and others in the Gila Valley. Now that he has a singular spot to head to instead of having to travel to multiple different job sites, his goal is to persevere through one last suspension. In order to do that, however, he has enlisted the assistance of his girlfriend, who instead of being with her prematurely born baby in a Tucson hospital is in Graham County with Blan, so she can drive him the seven miles from their home to his shop in Safford.