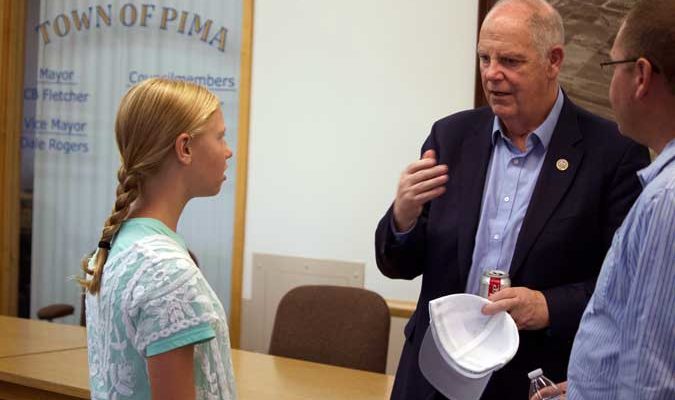 PIMA – While he is without a primary opponent, Rep. Tom O’Halleran (D)-CD1, still took the time to tour the Gila Valley on Saturday and met with various groups as he put his face out in the public prior to the election season.

One of his stops included the town of Pima, where he met and answered questions from leaders in the town and school. Earlier in the day, he also met with the area’s superintendents.

O’Halleran, of Sedona, is running unopposed since Miguel Olivas – his opponent from the 2016 primary – withdrew, but three Republicans, Wendy Rogers, Tiffany Shedd, and State Senator Steve Smith, are vying to be his opponent in the November election.

O’Halleran previously served as a Republican in the Arizona House of Representatives from 2001 – 2006 and in the Arizona State Senate from 2007 – 2009. After being unseated in the primary by Steve Pierce in the 2008 election, he resigned from the Republican Party in 2014 and ran as an Independent but narrowly lost being elected to the 6th District. He then became a Democrat in 2015 when he announced his candidacy for Arizona’s 1st Congressional District.

The district stretches to the Utah border to the north and the New Mexico border to the east and includes all of Graham, Greenlee, Coconino, Apache, and Navajo counties, along with parts of Gila, Maricopa, Mohave, Pima, Pinal, and Yavapai counties. Roughly 25 percent of the population in the district is Native American, making it home to more Native Americans than any other district in the United States.

O’Halleran, who is also a former Chicago police officer, voted with President Donald Trump’s preferred position on legislation roughly half the time he has been in federal office, however, he did vote against the GOP tax bill and told the group Saturday that he didn’t think it would be a wise move to shut down the government as Trump has promised to do if the border wall is not funded.

“I don’t think it’s a good idea to shut down the government,” O’Halleran said. “The real issue here is people lose their homes, their jobs, their businesses. This isn’t just ‘oh darn government employees are off for a while.’ This is about the rest of the American public having to suffer because we didn’t get our job done.”

O’Halleran is a member of the Blue Dog Coalition, which is a caucus of Democrat U.S. Representatives who identify as conservative Democrats. He is also a member of the Problem Solvers, which is made up of 24 Democrats and 24 Republicans who meet every week, according to O’Halleran. He said true bipartisanship and both Republicans and Democrats working together is the only way to get things done. He stated his voting record shows that 77 percent of the bills he has approved have been bipartisan.

“I could go on and on about bipartisanship, but, for me, that’s the only way to work,” O’Halleran said.

He told the group that his three top issues were broadband accessibility, healthcare, and education.

“We feel that if rural America is going to move forward those are three of the top issues that we have to address,” O’Halleran said.

While most of the questions asked to O’Halleran were actually more state issues than federal issues, Pima Town Councilor Sherrill Teeter asked about the federal welfare program and if he feels recipients should have to be drug tested before receiving benefits, such as an Electronic Benefits Transfer (EBT) card, which is used to purchase food. Teeter felt that some people are taking advantage of the welfare system and choosing to not work and receive benefits while at the same time being addicted to illicit substances.

O’Halleran said the majority of people on welfare were children, elderly people, and veterans and that only 3 to 5 percent would fit into the category Teeter was talking about. He added that drug addiction is a major problem but that he would like to see more recovery options rather than punitive actions against those who are addicted.

O’Halleran also doubted that many people chose to be on welfare rather than work a regular job because the benefits are so low that they are not able to afford anything other than food.

Teeter said she knew people who do just that and Pima school teacher Stephanie Hoopes said she actually made “considerably” more when she was on government assistance than she does now as a contributing member of society.

“I did the math,” Hoopes said. “Between food stamps and free health insurance, I made considerably more than what I do as a teacher. I could stay home and do nothing or I could go be a teacher and make less, so it’s a huge concern.”

O’Halleran said “plenty of teachers are on food stamps” and that is more reflective of how little teachers make than how much is available in the welfare program.

O’Halleran closed out his roundtable discussion by taking a question from Pima Vice Mayor Dale Roger’s 14-year-old daughter, Joy Rogers, who asked what was the biggest problem facing youths.

O’Halleran said the family structure breaking apart was one of the biggest issues regarding youths today, and that also leads into the drug problem as well. He said keeping the family intact and treating addiction through recovery options should be the priority.

After Rep. O’Halleran left, the group of local leaders and educators spoke about the event and said while it was nice to be able to speak with their congressional representative, they felt their time was over just as they began to be comfortable with the format. All-in-all, O’Halleran spent about an hour with the group before having to leave for his next appointment.