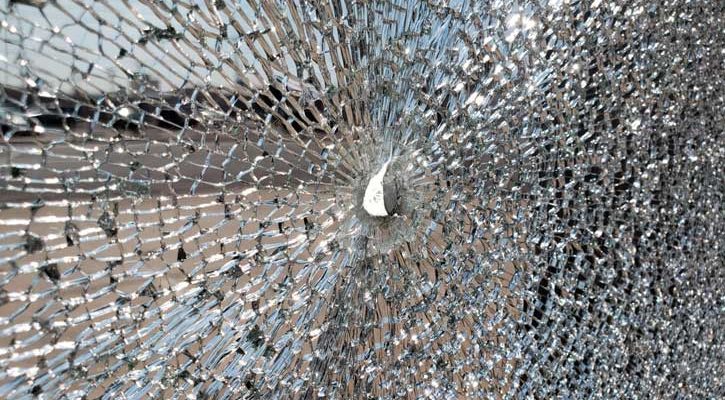 Photo By Kelsi Rasmussen: The window of this law office door was one of the many that were shot out by juvenile vandals Monday night.

SAFFORD – Two juveniles from Thatcher and Solomon were apprehended regarding thousands of dollars of damage done during a window-shooting rampage Monday night.

At least 10 incidents were reported to Safford Police between Monday night and Tuesday that appeared to involve the same suspects. The suspects later allegedly confessed to officers to shooting out windows of multiple vehicles throughout the city, including work vehicles for UPS and Jays Construction, as well as shooting the windows out at the Safford Church of Jesus Christ of Latter-day Saints’ Stake Center and the glass door to a law office building. All of the damage appeared to have been done by a BB-gun. The suspects also said they shot Safford Officer Luke Arbizo’s patrol vehicle twice but the window did not break.

On Wednesday, an officer was patrolling the area where a number of the incidents took place and received a tip from a subject who identified a juvenile who he had seen in the area with a BB-gun. The suspect also matched the description of one of three males who were reported in a similar incident as well as video surveillance from businesses near other reported shootings.

The 14-year-old suspect was interviewed at the Safford Police Department with his parents present and allegedly admitted to shooting the windows with his 16-year-old friend. Both juveniles said the third juvenile did not shoot the gun.

The BB-gun belonged to the 14-year-old suspect, and he turned it over to police, along with a container of BBs and CO2 cartridges. The case against him was forwarded to juvenile probation and he was released.

Safford Police ask all of the victims to provide the department with receipts to fix the damaged windows.