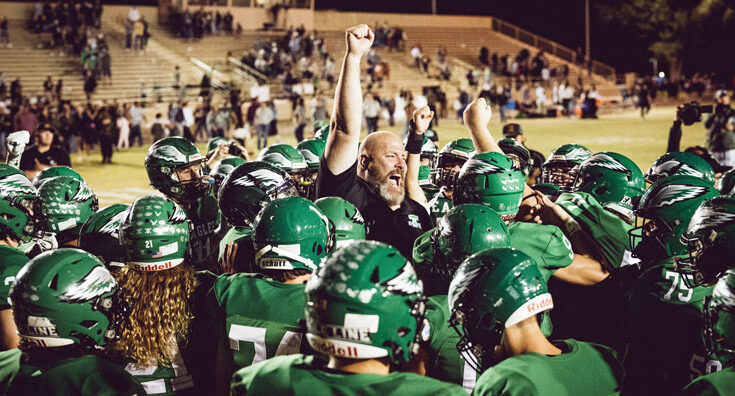 Photo By Steve Carter/Special to the Gila Herald: Thatcher head coach Dan Jones celebrates in the end zone after the Eagles secured the 3A South Region Championship with a 35-7 victory over Sabino on Friday night.

THATCHER – The Thatcher Eagles are the 3A South Region Champions with their victory over the Sabino Sabercats, 35-7 on Friday night.

The Eagles (4-0 region, 9-0) overall, are ranked No. 1 in the 3A Conference and look to secure that ranking and their unbeaten regular season on Friday on the road at the (Tucson) Palo Verde Magnet Titans (0-4 region, 2-7 overall). The Titans are coming off a 0-69 loss to Pusch Ridge, which lost their lone game so far this season to Thatcher, 14-28, on Sept. 24.

It was a gritty contest that wasn’t so pretty at times, but that’s Thatcher football. It has dominant offensive and defensive lines that help a robust running game and causes heavy pressure on offenses.

“Sabino is a great team,” Thatcher head coach Dan Jones said. “Their athletes are out of this world. We just wanted to keep the ball up and glad we were able to do that for the most part.”

The game against Sabino was likely closer than the fans would have imagined, with Thatcher up just 14-0 in the third with Sabino driving. However, the Sabercats’ quarterback, Cameron Hackworth, left the game after reportedly breaking his collar bone and Sabino failed to muster much of any offense after that.

While Thatcher’s defense might have bent with Hackworth in the game, it still didn’t break and the Sabercats’ lost the ball on downs on their first possession and then missed a 32-yard field goal attempt after having a first and goal. In total, the Eagles forced four turnovers on downs and five punts while giving up just a lone score at the end of the game with reserves on the field.

Offensively, Thatcher got it going right off the bat and drove the field ending with a 6-yard TD by Damien Oriero to put the Eagles up 7-0.

But on their second drive, the Sabercats’ defense stepped up with a sack of Thatcher QB Brandon Napier and then Britt Roberson snagged an INT on a deep pass by Napier on 3rd and 17.

While the offensive sputtered, Thatcher’s defense pushed Sabino back to its own 3-yard line to face a 3rd and 30. That’s when the Sabercats decided to do a surprise pooch punt . . . on third down.

If the move was meant to stop Thatcher from scoring a defensive touchdown, I guess it worked but it gave Thatcher the ball at Sabino’s 22-yard line. A few plays later, Ayden Bingham took it in from the 2 to put Thatcher up 14-0 and give the offense a shot of confidence.

The teams battled back and forth throughout the rest of the second quarter with nobody gaining an edge and Thatcher headed into halftime up 14-0.

After avoiding a Sabino comeback in the third quarter, Thatcher utilized excellent field position starting from Sabino’s 31 and finished the drive with a 2-yard TD from Cody Jones to go up 21-0.

Thatcher finished its scoring on the night in the fourth with a 20-yard TD scramble by Napier, and a 31-yard dive by Jones. Sabino got on the board with a late score against reserves in the fourth to make the final 35-7.

“That’s what we do in Thatcher, we just kind of keep hammering the nail (and) eventually it goes,” coach Jones said.

“We had a lot of goals with this team and they’re kind of lining up to do what we were doing and (they’re) a great group of young men,” coach Jones said. “It’s been a great ride.”

In other region prep action:

After the regular season, both teams are expected to host the first round of the 2A State Championship playoffs on Friday, Nov. 4, starting at 7 p.m., regardless of the outcome of their game against each other.