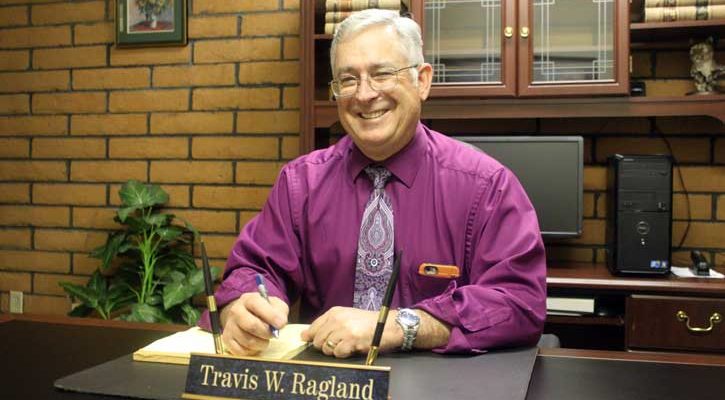 SAFFORD – It looks like the old gang is getting back together.

Local attorney Travis Ragland has been recommended to succeed outgoing Graham County Superior Court Judge Pro Tem D. Corey Sanders. The appointment will be official pending approval by the Graham County Board of Supervisors at its Tuesday morning meeting.

“I’m pretty excited to do it,” Ragland said. “I just hope I can do as good a job as Judge Sanders has done all the years he has been here.”

Judge Sanders is retiring March 30. He said the hiring of Ragland will be a seamless transition as Ragland has already been doing the work on a part-time basis and is familiar with the court staff. Judge Sanders was part of a committee tasked with screening candidates and making a recommendation to Graham County Superior Court Judge Michael D. Peterson. Ragland and Justice of the Peace District 2 Judge Wyatt Palmer were both recommended to Judge Peterson as qualified candidates.

“I’m very pleased with (Ragland’s selection),” Judge Sanders said. “He’s going to do a great job . . . We had two very well qualified candidates . . . We recommended both of them to Judge Peterson and then he chose Travis. They have a great working relationship. Judge Peterson and I have always had a great working relationship, so I think it’s going to be some great continuity to carry on with what we’ve been starting here over the years.”

With the position having to handle a variety of court subjects, including family court, divorce, juvenile hearings and more, Judge Peterson said Ragland was a natural choice.

Ragland previously spent 12 years working with Graham County Superior Court Judge Michael D. Peterson, from 2003 to 2015, when they were both attorneys working in family practice, civil and criminal law. Conversely, Judge Peterson started his practice in the building as a partner with Judge Sanders after Peterson had finished law school, and Ragland came aboard when Sanders was tapped by then Graham County Superior Court Judge R. Douglas Holt to become the pro tem in July 2003.

Most recently, Ragland has already been working as a part-time Graham County Superior Court Pro Tem since July 2017.

“I would like to thank – on behalf of the citizens of Graham County – Judge Sanders for his many years (15) of experience and his efforts,” Judge Peterson said.  “We will miss him and certainly wish him the best in the future. He was an awesome judge and even better man.”

“He (Judge Peterson) was always really good to work with,” Ragland said. “He is doing a lot up there. I’m excited to get up there and help as much as I can with all the changes he’s trying to make.”

After receiving his Juris Doctorate from Gonzaga University School of Law in 2002 and his Master of Laws degree from the University of Washington School of Law in 2003, Ragland began his law career in Graham County as a contract defense attorney for indigent clients. He has also worked as a special prosecutor for the town of Thatcher and as the town attorney and prosecutor for the town of Pima. Through it all, he said he might have had thoughts of one day becoming a judge but the everyday pursuits kept it on the backburner.

“I thought about it a little bit, (but) once you get into the business of practicing law and taking care of your clients it gets kind of sidetracked,” Ragland said. “And now, fortunately, I’ve been lucky enough to be recommended by Judge Peterson after the selection process.”