Jon Johnson Photo/Gila Herald: Pima head coach Josh Wilkins, left, has been named the 2A Conference Coach of the Year, and Jaxon John, right, was named the Offensive Player of the Year.

PIMA – It’s a sweep for first-year Pima head coach Josh Wilkins and junior Jaxon John, who was named the 2A Conference Coach of the Year and Offensive Player of the Year, respectively.

Wilkins and the Pima Roughriders (13-1) finished an unbeaten conference season with a 50-19 state championship over Morenci.

2A Conference Coach of the Year – Josh Wilkins

Pima head coach Josh Wilkins is in his first year at the helm of the varsity team but has been around this group of players for years.

Coach Wilkins went undefeated in the 2A conference with Pima’s only loss of the year to 3A State Runner-Up Thatcher, who lost only the state championship game.

2A Conference Offensive Player of the Year – Jaxon John

Junior Jaxon John did a little bit of everything for the Roughriders, including kick-offs and PATs, kickoff and punt returns, receiver, up-back, and defensive back.

Some of the most exciting plays come on kickoff and punt returns, and fans were on the edge of their seats every time John got the chance to return one.

2A Conference Defensive Player of the Year – Tristen Sanchez/Morenci

Tristen Sanchez was a beast all year long for the tough Morenci team, who shut down everyone but Pima. Sanchez played tough in the 2A State Championship game as well, forcing a fumble near the goal line that ended in a turnover to the Wildcats.

2A Conference Player of the Year – Christian Pando – Willcox

Christian Pando finished sixth in the state in rushing this year with 1,807 yards (Morenci’s Michael Casillas was third with 1,936 yards) and second in scoring with 240 points (Casillas fifth with 204 points).

Pando led a Willcox team that went undefeated in the 2A San Pedro Region and made it to the state semifinals before falling to state champion Pima, 7-35. 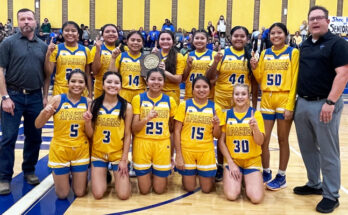