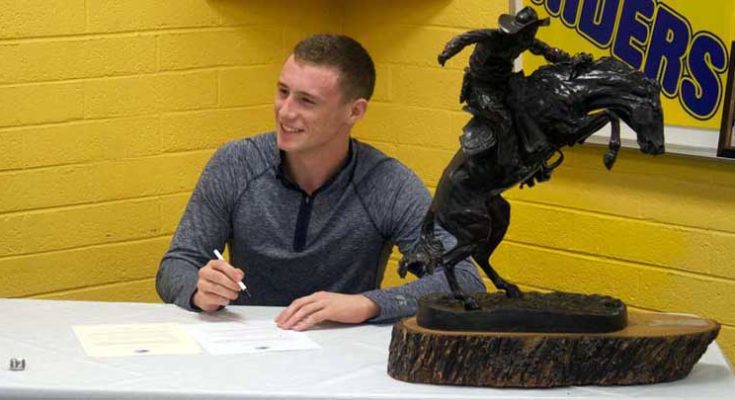 PIMA – Perfection – that’s what Pima’s Ryne Lewis strove for in his senior season wrestling in the 170-pound division for Pima. Perfection and a state championship was the goal, and through his hard work, determination, and coaching, Lewis finished his last season without a blemish, 59-0.

“It’s been a dream of mine for a while, so to finally get it was super cool,” Lewis said.

Lewis is a High School All-American and owns two Pima records for most pins in a season and most wins in a season. He has been named outstanding wrestler at numerous tournaments, and after finishing 6th at state his freshman year and 3rd his sophomore year, he became a state champion in his junior year.

With a state championship already under his belt, Lewis upped his goal to finish undefeated this year, and while it wasn’t always easy, he managed to eclipse all expectations.

In his semifinal match at the state tournament against Yuma Catholic’s Richard Molina, Lewis almost faltered as the match went into three overtimes.

“There were certain times in the match that I got worried, but I controlled most of the match,” Lewis said. “Once we got to the third overtime, he ended up locking hands, so I knew I had it locked up then.”

Lewis credits his strict diet during the season for keeping him on weight, and his coaches – father Sean Lewis and Pima Wrestling Coach Digger O’Dell, as well as his off-season coach, Safford Wrestling Coach Herman Andrews – for his success.

“I’d like to thank all my practice partners and everyone who helped me along the way,” Lewis said.

With his high school career under his belt, Lewis is now preparing for the next phase as he takes his talents to Notre Dame College in South Euclid, Ohio.

Lewis previously signed his letter of intent last November and became just the second Roughrider in the school’s 25-year wrestling history to receive a scholarship. He intends to major in physical therapy/sports medicine and has already begun that area of schooling through the local GIFT program.

“I’m proud of him,” Ryne’s dad and coach, Sean Lewis, previously said. “He’s worked hard. It’s one of those sports where a college only gets nine spots for an entire program. So, to get into a college and get money for school, it’s tough to do.”

Notre Dame College was founded in 1922 as a Catholic, four-year liberal arts institution for women and began admitting men in 2001. In 2012, the school became a full-fledged NCAA Division II member an participates in 22 men’s and women’s intercollegiate sports.