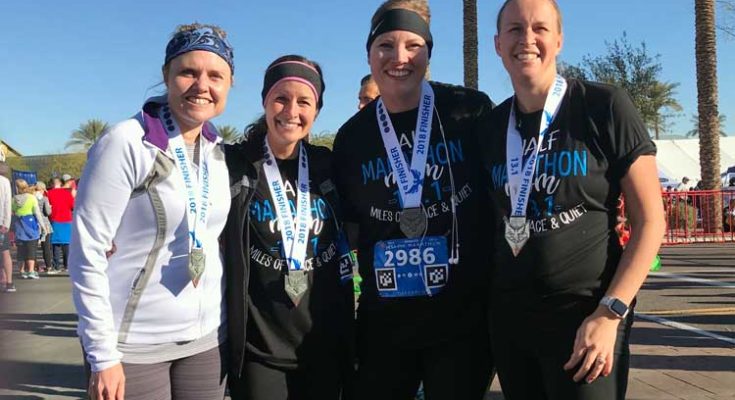 Contributed Photo: A group of moms celebrates finishing the Mesa-Phoenix Half Marathon. They are, from left, Jessica Medlin, Michele Peterson, Makenzie Burk, and Angela Paull. At least nine moms from the area competed in the marathon, half-marathon, or 10K.

MESA – Whether it was qualifying for the Boston Marathon, finishing a first half-marathon, or just having a good time with friends and family, a group of moms from Pima and Thatcher accomplished their goals at the Sprouts Mesa-Phoenix Marathon on Saturday, Feb. 24.

At least nine local moms and one daughter competed in the event in either the 10K run, half marathon or full marathon with experience levels to match.

For local race enthusiasts Melinda Nelson and Bonnie Richardson, the goal was to qualify for the Boston Marathon, which they did for their age group with a time of 3:31 and 3:30, respectively. Nelson and Richardson are training partners and ran the whole race side-by-side.

This was Nelson’s eighth marathon in the past 14 years. She said she was hopeful for a good time due to the slope of the course, which starts at 2,082 feet and ends at 1,201 feet. Nelson needed to finish in 3:40 to qualify for the Boston Marathon, but her goal was 3:32, which would have been her fastest time ever. She exceeded her expectations by finishing at 3:21:23, after finishing the same marathon last year at 3:40.

Nelson credited her intense interval training regimen with Richardson for her faster time. Instead of just increasing the length of their runs during training, Nelson and Richardson did training to increase their speed.

Richardson qualified for the Boston Marathon last year as well and just edged out Nelson this year.

“Bonnie is fast,” Nelson said. “She has always been faster than me.”

Nelson also had the inspiration to finish strong as her daughter, Kali, ran the last three miles with her to just before the finish line.

Along with Nelson and Richardson, Cody Marshall also finished the full marathon, while Michele Peterson, Jessica Medlin, Angela Paull, and Mackenzie Burk finished the half-marathon, and Miquel McRae and Stephanie Hoopes with her daughter, Addyson, finished the 10K. All of the women, except for Richardson, live in Pima and many trained with each other, but who got who to participate in the event is debatable.

It was the first half-marathon (13.1 miles) for Peterson, who had been running prior to her training program, which lasted for about eight weeks. She said she was peer pressured by her friends to compete in the event.

Paull gave birth to her daughter just four months ago but wasn’t going to let anything stop her from competing. She was signed up last year as well, but couldn’t run due to an injury. This year, she was determined to accomplish her goal.

“I kind of just was forced into it because I was already signed up for it last year,” Paull said. “It went really good. I did better than I expected.”

Paull said the feeling of accomplishment of finishing the race was the most fulfilling part. She added that having the group of moms up there together was a great motivating factor.”

“A lot of us trained together at different times and it really made it just an all-around fun event to have us all together,” she said. “I think everyone did really awesome.”

It was Burk’s first half-marathon as well. She said she finished by taking it one mile at a time.

“I just wanted to prove to myself that I could do something hard,” she said.

Burk said she hit a wall at the 10-mile mark but even while the last three miles were tough, she plans on running in another half-marathon.

“I just kept thinking that I just needed to finish and as soon as I finished it would be over,” Burk said. “My family was at the end, so that helped. And getting that awesome medal.”

Burk said while she was sore and swollen from the ordeal, it was something she loved doing and will likely be back.

“I really loved it,” she said. “I will totally sign up for another one, but I will probably train a little more. It is hard with kids, trying to find time to train, but I would definitely do it again.”

It is the medal that will bring McRae back.

“Every year you go you get a medal and if you go five times in a row all the medals make a cool emblem,” she said.

McRae blamed Peterson for pushing her to compete.

“It was peer pressure from Michele Peterson,” McRae said. “It was all Michele.”

McRae said she enjoyed the atmosphere with all the people and excitement of the race, but that she wouldn’t have done it if she couldn’t have been there with her friends.

Nelson agreed and said she was proud and happy for all her friends who competed in the event.

“Everyone did really great and surpassed their goals,” Nelson said. “The camaraderie of the race was just really great.”