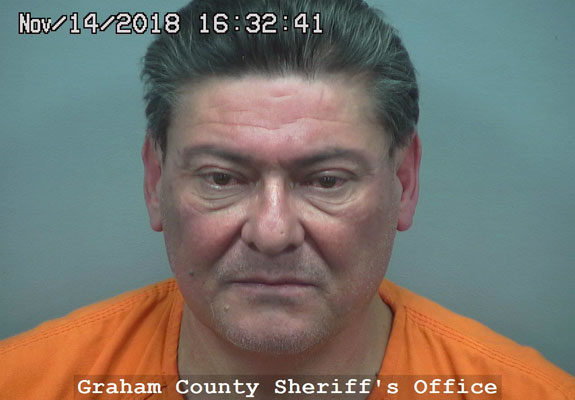 Contributed Photo/Courtesy GCSO: Michael Abeyta, 52, was booked into the Graham County Adult Detention Facility after allegedly assaulting his girlfriend with a dead-blow hammer.

SAFFORD – A Safford man was arrested and booked into the Graham County Adult Detention Facility on a charge of aggravated assault/domestic violence in the early morning hours of Wednesday, Nov. 14, after allegedly striking his girlfriend in her knee with a dead-blow hammer.

Michael Abeyta, 52, was taken into custody hours after the incident when he returned to the scene to recover his medication from a residence. He reportedly said he didn’t know how his girlfriend got her.

However, the girlfriend, who was treated at the Mt. Graham Regional Medical Center (MGRMC) for an injury to her left knee which included an approximate 2-inch laceration, said Abeyta struck her with a sledgehammer while she slept at her residence on 11th Street.

An officer was initially dispatched to the ER of MGRMC at about 3:57 a.m. regarding the assault. The victim was being treated for her injury and advised that Abeyta had been drinking and acting “stupid.” The victim said she told Abeyta to shut up and go to sleep and then he grabbed a sledgehammer that was in the room and hit her.

While the victim called the weapon a sledgehammer, it was actually found to be a dead-blow hammer, which is a specialized mallet helpful in minimizing damage to the struck surface and in limiting peak striking force, with minimal elastic rebound from the struck surface.

An officer investigated at the residence and was allowed to search the bedroom by the victim’s sister. Inside, he located what he described as a black dead-blow hammer at the foot of the bed. The officer also noticed blood on the bedsheet. However, Abeyta was nowhere to be found.

Later the same day, Abeyta was seen attempting to enter the residence at about 11:46 a.m. Abeyta left the residence prior to police arrival, but an officer located him soon after at 11th Street and 10th Avenue and took him into custody.

Abeyta said he was simply trying to get his medication from the house and didn’t know how his girlfriend was injured. He was then taken to the jail.