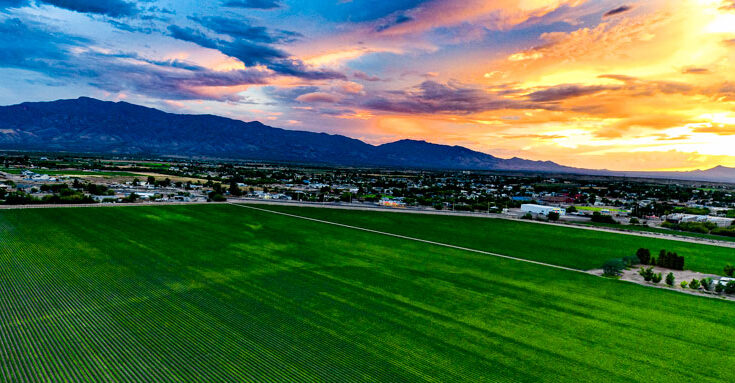 Jon Johnson Photo/Gila Herald: The new Pima High School is slated to be built on a 40-acre parcel across Highway 70 from the Speedway gas station. The land is currently being used to grow cotton.

PIMA – The town of Pima is growing, and with it so is the population of its schools. To accommodate the new growth, the state has allocated $22.3 million for the construction of a new Pima High School – slated to open in Fall 2025.

Pima Superintendent Sean Rickert gave a progress update to the Pima School Board at its Thursday night meeting and said a new location for the proposed 60,000-square-foot high school had been selected.

The new proposed location is 40 acres of current cotton fields just north of U.S. Highway 70 north of the Speedway gas station at 325 E. U.S. Highway 70. Rickert said the athletic fields and/or stadium/gym would be placed toward the highway to lessen light pollution for nearby residential areas. There are two separate landowners they are in discussions with and the state will be the purchaser of the land.

“Our intent is to build a 60,000-square-foot high school on a 40-acre campus located just across the highway from Speedway,” Rickert announced at the meeting.

The state previously looked at putting the new high school to the south of the Vard Lines Roping Arena on state land but a study from the 1980s found pesticides in the area, so a new location was needed, according to Rickert.

With the selection of an architect yet to be made, what the high school will look like is not yet known. A committee has narrowed down the list of possible architectural firms from six down to two and will interview the two finalists later this month. Discussions have also been made with Arizona Department of Transportation (ADOT) representatives regarding how the new high school will be ingressed and egressed from the highway.

In addition to the $22.3 million levied by the state for the high school construction, Rickert said the school will also be seeking other sources of funding to focus on improvement in three key areas: Career and Technical Education (CTE), Science, Technology, Engineering, and Math (STEM), and athletics.

Board member JJ Alder expressed his desire to have high-quality athletic facilities – especially if residents are ultimately asked to assist with additional funding through a tax or something. Board member Clint Colvin echoed Alder’s assessment and the men said one of the most visible aspects of the school to the community and as a whole will be its athletic venues.

“Obviously number one is our students, number two is our teachers, but the town – if they’re going to end up being taxed – they better enjoy something for it,” Alder said.

Rickert said finding those additional funds at the design phase is important to see exactly what number is necessary to build what is desired – especially with a commitment to CTE, STEM, and athletics. He added that Pima’s student body is well-rounded with the same students in both college prep courses and CTE courses.