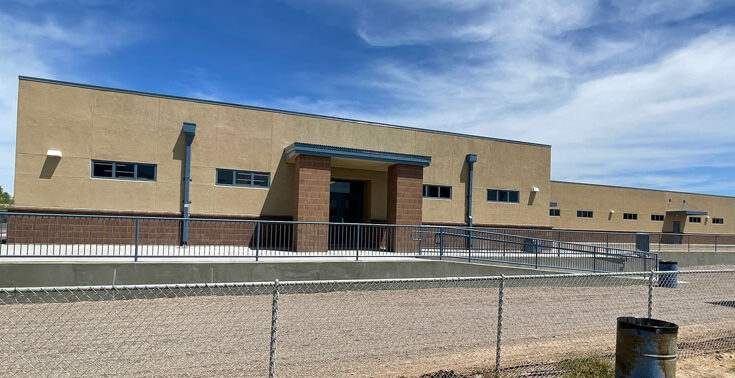 The new facility took about two years to get built through planning, financing, and construction. On Saturday, the district held a ribbon-cutting and open house to display the new facility to the public.

“It’s been a chore getting it built but it will be done by the end of this month and we’ll spend the summer moving desks and teacher supplies and all that in here so in August when kindergarteners and first and second graders start for school we’ll be ready for them to come into these classrooms,” said Pima Superintendent Sean Rickert.

The building was paid utilizing three separate funding sources, with about one-third coming from the Schools Facilities Board, another third from capital reserve funds saved from the past eight years, and the final third through a 10-year loan. The new addition was one of three major projects the district performed in the past year, with the demolition of a building and new roofing for the schools as the other two projects.

The new building will house Kindergarten through second grade and will have four classrooms for each grade level and a resource room for students with special needs, restrooms, and a teacher workroom. The school’s previous expansion for fifth and sixth grades (the adjacent building) will now house third and fourth grades and the fifth and sixth-grade classes will be moved to the classrooms formerly utilized by the lower grades. Additionally, the high school will also take over six of the vacated elementary classrooms, and the new building will allow the district to do away with some modular classrooms it had previously erected.

“The space was badly needed to keep the quality of the programs going,” Rickert said.

The district will now turn its attention to building a new, modern high school, with a possible location being on state land near the Vard Lines Memorial Roping Arena.

Rickert said that the district currently has its elementary, middle school, and high school all on a 12-acre site and that, normally, a high school by itself should have its own 12-acre site.

“We don’t have dedicated facilities for dedicated programs and that just means that everything suffers,” Rickert said. “So, our goal is to get a whole new site . . .”

Rickert believes it will take about three to three-and-a-half years to get the initial new high school facility built with a possible opening in August 2025. He said the new high school would eventually have its own new football field and other amenities but that they would most likely be built in phases.