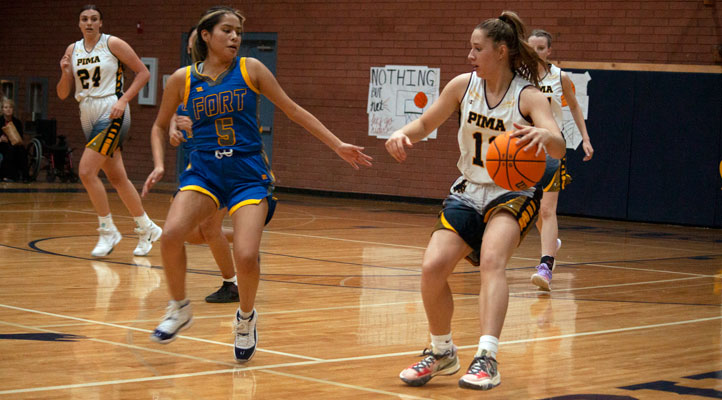 Pima plays in the 2A East Region and Fort Thomas is in the 1A South Region. The Roughriders scored more than 20 points in each of the first three quarters and held Fort Thomas’ all-star Jasmine Olivar to just 5 points in the victory.

The Roughriders burst out of the gate with a 26-point opening quarter as Aubrie Sherwood and Saydee Allred both struck from deep twice and Pima was up 26-11 after one.”

Pima used balanced play to keep its lead in the second quarter as Chase Stanley went off for Fort Thomas, scoring 10 of her 13 points for the game. Still, Pima led handily, 47-26, as the teams broke for halftime.

It all fell apart for Fort Thomas in the third quarter as turnovers led to fast-break layup opportunities for Pima and the Roughriders kept tossing the ball up the court and Aubrie Sherwood would gather it and lay it in time after time. Aubrie had six field goals for 12 of her game-high 22 points in the third alone.

Five Roughriders scored in double figures, following Aubrie that included Allred with 16, Ashlynn Chlarson with 12, Ashlie Sherwood with 11, and Jayci McClain with 10. Others who scored included Samantha Pippo with 8, Maya Mattice with 7, and Ella Wiltbank with 1.

“It (the victory) feels pretty good,” McClain said. “I think we deserved it. We worked really hard.”

Stanley led the way for Fort Thomas with 13, followed by Alleena Gilbert with 11, Hailey Hinton with 7, Jasmine Olivar with 5, Andryana Talgo, and L.D. Rope with 4 each, and Kaylei Preston with 2.

Pima subbed in its bench for nearly the entire fourth quarter but still scored double figures with 12 in the quarter to finish the game with 87 to 46 for Fort Thomas.

“I’m proud of the girls,” Corona said. “That’s a good statement (that) we’re ready for the rest of the games now.”

For more photos of the game check out the Gila Herald’s photo album here.