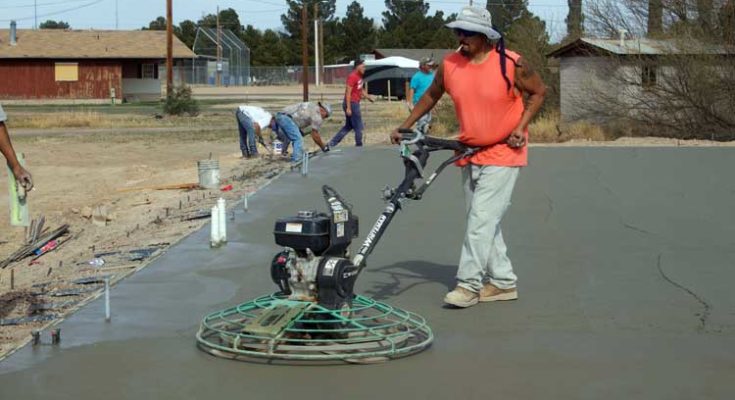 PIMA – Not too many good things go on at 2:30 in the morning, but there was an exception to that in Pima on Thursday as the crew from Yentsch’s Concrete arrived to begin pouring the slab for the town’s new 8,000 square-feet metal building on U.S. Highway 70.

The building is a pre-fabricated copy of the Open Loop Energy Inc. building north of Safford.

The town purchased the old Graco car lot property after the Pima Town Council unanimously voted to do so at its Oct. 3, 2017 meeting with the caveat that Optimal Health Systems (OHS) sign a long-term (10-year) lease for the space. OHS will put on its finishing touches to the building, including an attractive facade, landscaping and paint.

According to owner Doug Grant, OHS is a whole-food nutrition company that has operated in Pima since 2003. It services a variety of people, including athletes, doctors, and people just wanting to improve their health.

“We’ve been needing to build a larger facility for years now and have been looking where we could do it and stay in Pima,” Grant said in October 2017.

At the time of the agreement, Grant said OHS had about 20 employees and would likely increase to 35 to 40 employees in the first year at its new location. OHS is one of Pima’s largest sources of sales tax revenue as well and is one of if not the largest shipper in Pima, utilizing the U.S. Post Office and UPS to ship hundreds of boxes each week.

With comparably small walk-in traffic compared to its main shipping sales, OHS could conceivably move just about anywhere in the Gila Valley and continue its operations. Keeping the tax revenue in Pima while creating a larger economic opportunity and cleaning up part of the town was paramount to Pima Town Manager Sean Lewis, who spearheaded the plan.

The town purchased the land for $115,000 and the metal building shell, which will arrive in roughly two weeks and will begin to be constructed, cost $50,000. With electric, plumbing and other finishing costs, the town’s total investment is about $215,000, with about $136,350 coming out of pocket thanks to it selling land across from the cemetery for $78,650.

Lewis previously said he believed the town would recoup its out-of-pocket costs within four years and total investment within six years through the lease of the main building alone. Additionally, there is space to add three offices available for lease/rent that will be built if renters are found.

“That area is our biggest open commercial lot in our commercial zone with highway frontage in Pima and it’s currently a major blight on our town,” Lewis said at the October 2017 meeting. “For Pima residents, it looks bad, and for people traveling through Pima, it looks bad. There’s a halfway burnt-down building and a bunch of weeds and a bunch of old cars. It gives the wrong impression of what we want people to see Pima as.”

The Pima Fire Department took care of burning down the rest of the building, and the area was scraped clear of weeds and the cars were removed by Nutcracker Towing.

The foundation was prepared and on Thursday workers from Yentsch’s Concrete leaped into action, pouring 200 yards of concrete to create the foundation’s slab with several spots going seven feet deep to serve as anchors for the building. In the next couple of weeks, the building should arrive and assembly will begin.