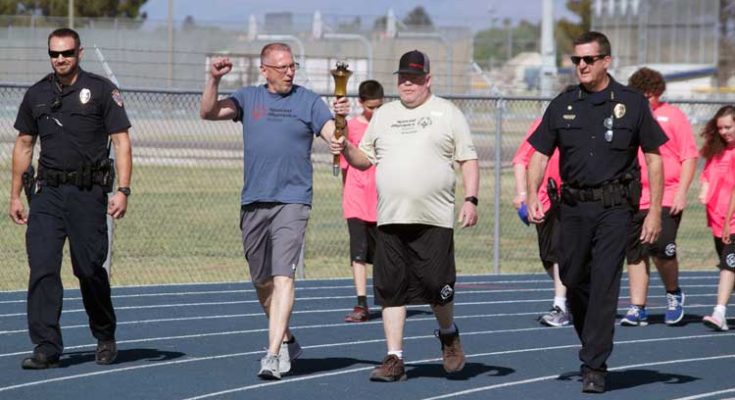 SAFFORD – The sun was shining Saturday but it was no match for the bright smiles on the faces of the competitors at Special Olympics Arizona’s Monument Area Track and Field Competition in Safford.

The community-wide event Saturday brought together a wide assortment of people, including dignitaries such as Safford Mayor Jason Kouts, Graham County Supervisor Paul David, Safford Police Chief Joe Brugman – who handed out the medals throughout the day – and Graham County School Superintendent Donna McGaughey – who manned the timers for the 10th year in a row.

“I love the Special Olympics and I love running the races,” McGaughey said. “I think (the event) is extremely important. It’s a great self-esteem booster and they have the camaraderie of all the other athletes . . . This is an area where they are really able to excel.”

But there were also numerous other volunteers and attendees, including friends and family members of the Special Olympians, teachers, co-workers, bikers, and corporate sponsors such as Freeport McMoran Inc. There was also a special health area that included a free dental screening by the Tooth Budds organization.

The inclusive event was bolstered this year by allowing those without disabilities to compete as well. Special Olympics Arizona Chief Operating Officer Isaac Sanft said the change brought together family and friends even more, especially during the school event Friday.

“The thing we see is that those (Special Olympian) students are coming out with a network of peers who don’t have disabilities who are going to college or are career driven,” he said. “So it creates these really positive bonds and relationships between people who sometimes wouldn’t get to connect like that. But because sport is the great equalizer, they have that relationship, so then they get out into the community and they’re not just put into a community center to hang out all day by themselves. They have friends who play sports with them; they’re going to the movies together, they’re hanging out together creating a network for young people and then having higher expectations for them as adults. It does wonders.”

Returning Special Olympian Chris Elkins was sharpening his skills for the statewide event. His mother, Shari Elkins, said they enjoy competing in the event every year and that this year would be extra special because Chris’ brothers would be able to join him on the field in camaraderie.

“It’s a lot of fun,” Joey Elkins said. “I usually just watch him (Chris Elkins) but now I get to compete with him. It’s fun. He likes it. He’s excited.”

Chris Elkins said the long jump was his favorite event and that he was pleased to be able to do the events with his brothers. He said the most important thing about the event wasn’t winning, however, but having fun.

David Ruiz, of Safford, took first place in the 100-meter dash and said he was pleased with his performance.

He added that the long jump was his favorite event, however, and sported his gold medal as he competed.

Supervisor Paul David said the event was important to the community because it allows the competitors the opportunity to feel important and be the center of attention for the day.

“I know it’s important to them and they feel special,” David said. “Oftentimes they are excluded and marginalized in society and this gives them the chance to be the focus and have people clap and cheer for them and they’re hungry for it and they need it. It’s just a great event.”

“The Special Olympics is good because it’s a community event,” Mayor Kouts said. “We have lots of needs in our community and this is one that I’m very big on supporting. It shows diversity and opens up more and I think the whole community should be involved.”

The sound of the hogs entering the parking lot was unmistakable and then a group of bikers clad in their vests from the FFF Clubhouse and blue jeans strode into the stadium, where they promptly got busy helping score the javelin and shot put events while they cheered on the competitors.

Clubhouse representative Bill Leckliter said he works at the Department of Economic Services for people with developmental disabilities during the week and hangs out with the motorcycle club on the weekend, so it was a natural to marry his two passions and a good number of club members were more than happy to help out.

“We just appreciate honoring the guys today,” Leckliter said. “This is their day.”