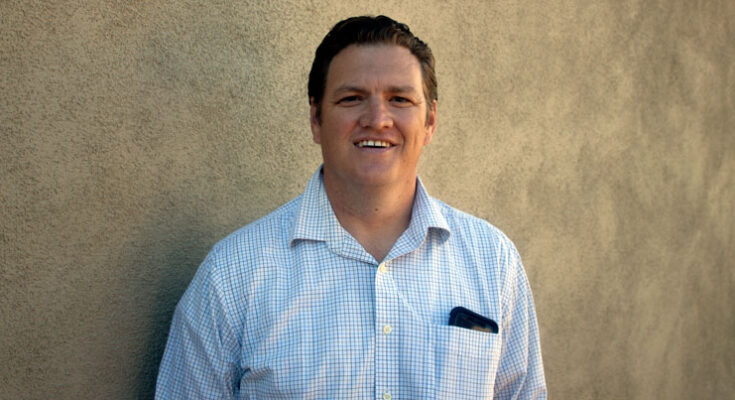 Jon Johnson Photo/Gila Herald: Vernon Batty has been hired as the new Pima Town Manager. He will officially begin his tenure on Oct. 5.

PIMA – The town of Pima has a new town manager.

Vernon Batty, owner of Jon’s Heating and Cooling has accepted the position as Pima Town Manager. He is expected to be announced by the Pima Town Council at its Oct. 5 meeting. Batty was born and raised in Pima and is a fifth-generation resident with relatives that stretch back to the founding of the town.

The Pima Town Council previously offered the position to Thomas Nicholas, but the two parties couldn’t come to terms.

“We’re excited to have somebody on board,” Fletcher said. “He’s going to be a good one for us I think. He’s got a real strong will, and I think he can unite the council so that we can probably move forward in harmony.”

“It’s too bad things happened the way they happened, but we’ve got to get over it and work together and get some things done. “We’ve been stalled for too long.”

Fletcher said Batty will be sworn in at the Oct. 5 council meeting and begin his tenure. Fetcher notified Batty of the council’s decision on Thursday night and then met on Friday and toured the town, went over the duties of the job, and came to terms on his employment. Batty will start at $75,000 per year plus benefits.

“He just picked right up on it,” Fletcher said. “I think he’s very excited and we’re excited to have him.”

Batty replaces former town manager Sean Lewis, who resigned Aug. 5 after four years at the helm. Lewis, who had been a longtime town employee through the Public Works Department, tendered his resignation prior to the start of a special council meeting on Aug. 5. The council accepted Lewis’ resignation by a 3-2 vote with council members Sherrill Teeter and Lucas Hoopes voting in dissent. Hoopes and Teeter had previously voted to terminate Lewis over what they believe to have been inappropriate use of a town credit card during the 2019/2020 Fiscal Year.

After resigning, Lewis told the Gila Herald that he decided to tender his resignation for the betterment of the town and council.

Batty told the Gila Herald that he knows most of the council pretty well and hopes to help everybody work together.

“I’m looking forward to moving forward past all that and just get some things done,” Batty said.

He said he will use the managerial experience he has amassed running Jon’s Heating and Cooling for the past 12 years to help run the town. Batty has worked for the family business “pretty much” his whole life since he turned 14, only taking breaks to serve a mission for his church and to attend the University of Arizona. He took over the air conditioning business in 2009 and will turn over the day-to-day operations to a longtime employee as he diverts his full attention to the town and its various departments.

“I’m really looking forward to working with the council and with the heads of all the departments,” Batty said. “We have really good department heads and well-functioning departments here between the police officers, and the fire (department) and the maintenance and everything else. We actually have a well-running town regardless of the contention and the strife that we’ve had kind of from the top recently. I hope that we can move past that and come together and address any problems that we have. Going in right now, I don’t even know what I don’t know. I’ve been in management for a long, long time and I feel comfortable in my abilities there but I’ve got a lot to learn on actually running a town and the ins and outs, and so I’m willing to get to work and start studying to understand my new position but willing to listen to those who are already there and have that knowledge to help me along.”

He highlighted priorities including infrastructure improvements and continued economic development.

“With all the growth that we have coming – that we’ve been experiencing and will continue to experience – I want to make sure our roads and everything are up to snuff,” Batty said. “If we’re going to be building a new high school, (I want to) make sure we have safe roads to get there and wide enough and enough avenues so we don’t have traffic jams trying to get to football games and whatnot.”

The Pima School District is looking at building a new high school off 1200 South out near the Vard Lines Memorial Roping Arena. The town has already begun an industrial zone in the area with multiple businesses. However, the main north/south roadway section in that area, 800 West, is dirt and the town previously installed a gate on it and had closed it at the intersection with 1200 South/Cottonwood Wash Road. The cost of paving the section of road was previously listed to be about $100,000.