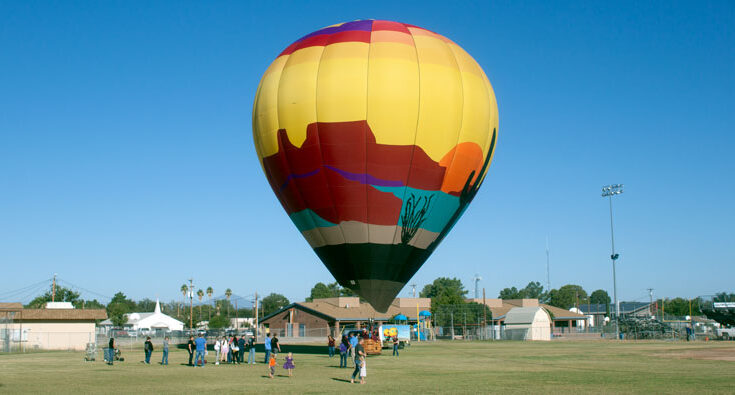 Jon Johnson Photo/Gila Herald: AZ Air Ventures gave a presentation to the aviation class at Pima High School on Tuesday and took students into the air for a tethered hot air balloon ride.

PIMA – There’s only so much one can learn in a classroom setting using models.

That’s one reason why the Pima School District and its aviation class instructor Stephanie Hoopes were excited to have AZ Air Ventures bring its hot air balloon out to the Pima High School baseball field on Tuesday for some first-hand instruction. That, and the chance to go up in a hot air balloon, of course.

“Out of the 17 students in class, there’s only three who have been up in the air in anything, whether it’s an airplane or anything,” Hoopes said.

AZ Air Ventures owners and operators Greg and Susan Lindsey gave a thorough explanation on the operation of lighter than air aircraft and then invited the students to assist them in raising the balloon.

The balloon remained tethered at the site, held down by multiple ropes, and was limited to a height of about 75 feet. That was plenty high for those who went in for a ride, however, after Greg first tested it out to make sure the conditions were favorable.

Pima Superintendent Sean Rickert said the Pima School Board unanimously approved the event, which had to have board approval since students would be rising 75 feet above the ground in a wicker basket. He described the event as something that shows the practicality of the STEM class experience.

“It’s a great opportunity for students to both learn about aviation but also to see the relevance of what they learned in their science classes and math classes,” Rickert said.

Hoopes said the students also have the opportunity to join the AZ Air Venture’s crew for a balloon extravaganza set to take place in Safford at the end of December or early January.

“We only have one unit on hot air balloons, but if it really interests someone they’ll have the opportunity to do more with it,” Hoopes said.

To see a photo album from the event click here.