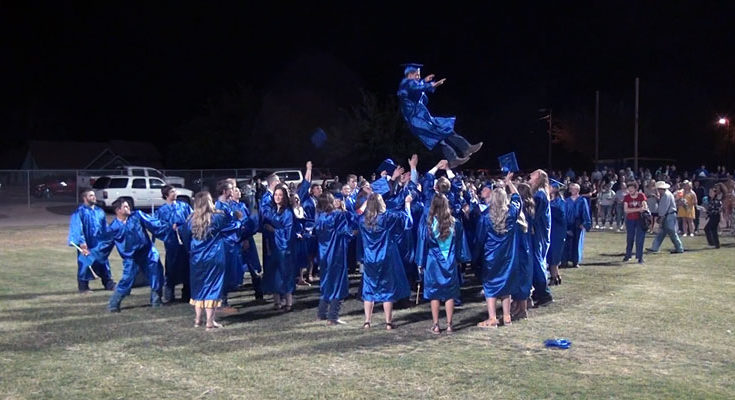 Jon Johnson File Photo/Gila Herald: In Pima, they don’t just toss their hats upon graduation but each other as well. However, this year the school is planning on holding a virtual graduation ceremony.

PIMA – While the town of Pima has reopened its government, the high school has decided against holding a regular graduation ceremony and instead will follow Eastern Arizona College’s model and hold a virtual ceremony.

Pima High School Principal Cody Barlow sent out a letter Monday advising of the school’s decision and said details on how to access the virtual ceremony will be made available at a later date.

“To the extent possible, the virtual graduation ceremony will replicate as many components of our normal in-person graduation ceremony as possible,” Barlow wrote in his letter. “In fact, we plan to include pictures and recordings of each graduate in an attempt to make the ceremony more personalized. The graduation will be streamed for families to view from the comfort and safety of their own homes.”

Pima Superintendent Sean Rickert said that due to the guidelines from the health department and governor, the school didn’t have a whole lot of options.

“But our goal is to provide a meaningful recognition of our students who are graduating this year,” Rickert said. “If, down the road, it becomes possible to do something else to recognize them, we’ll be glad to do that but, at this point, we just wanted to make sure something happens on a timeline that people are expecting. People are going to go off to jobs and missions and enlistments.”

The event is scheduled to take place Wednesday, May 20, starting at 8 p.m. Barlow said the decision to move to a virtual ceremony was made after considerable discussion and due to the “ever-changing future amidst COVID-19.” The event will feature individual videos of graduates formed as a short tribute, outlining their time at Pima and their plans for the future. Class speeches and musical numbers will also be recorded and included. The whole video package will then be broadcast on YouTube.

“Although we know an in-person graduation ceremony is everybody’s preference, in order to provide each student the opportunity to be recognized at this significant milestone, we must plan immediately to execute a virtual ceremony in the event an in-person graduation is not possible,” Barlow wrote. “We will certainly leave the door open for a recognition and/or celebration of the Class of 2020 at a future date.”

While Rickert acknowledged the ceremony won’t be the same, he said the district felt this was the best way to proceed.

“It’s not going to be the same, but right now nothing is the same,” Rickert said.