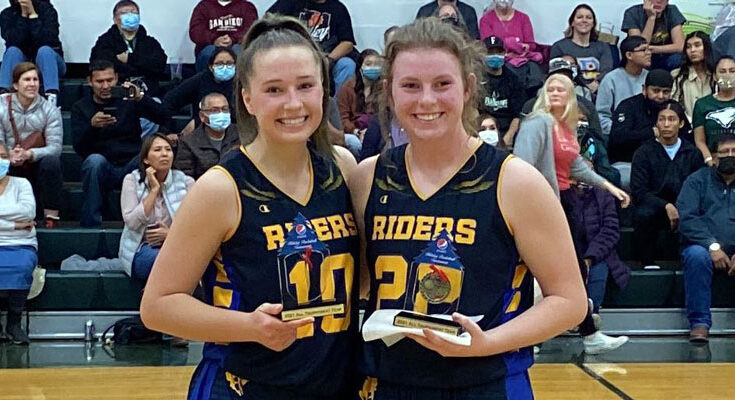 Photo Courtesy David Allred: From left, Aubrie Sherwood and Saydee Allred were named to the Pepsi Holiday Tournament All-Tournament Team. The Pima Roughriders girls basketball team fell in the championship game to host Flagstaff, 46-63., and finished as the tournament runners-up.

FLAGSTAFF – The Pima girls basketball team fell just short of their goal on Saturday and finished as the Pepsi Holiday Tournament Runners-Up.

The Pima boys basketball team went 3-2 in the tournament and finished in third place with a win over 3A Snowflake (0-2 conference, 3-4 overall), 55-52 on Saturday afternoon.

Earlier in the day, the Roughriders fell to the 4A Coconino Panthers (1-2 conference, 5-2 overall) in the semifinals to knock Pima into the consolation bracket.

Pima dropped their first tournament game to 4A Paradise Honors 37-47; beat 4A Mingus Union 59-34; then beat 2A Arizona Lutheran 53-37 before facing Coconino in the semifinals.