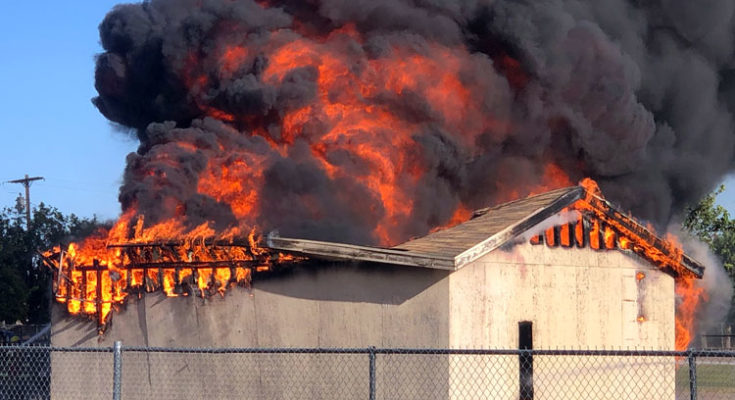 Jon Johnson Photo/Gila Herald: The roof begins to collapse as it is overtaken with fire during a controlled demolition burn by the Pima Fire Department for Pima Schools on Thursday.

PIMA – Flames leaped forth from the burning structure; thick black smoke filled the air as the roof collapsed.

And that was just what the Pima Fire Department had planned for as it performed a controlled burn early Thursday evening at Pima Schools.

The objective was to eliminate an old shed that stood between the school’s old, run-down, and no longer used tennis courts and the often-used Digger O’ Dell Community Activity Center.

The area is being cleared to make way for the construction of a 13-classroom, 16,000-square-foot building that will be utilized for K-2 classrooms. The new facility will be the largest building for the Pima School District and will include a playground.

Funding for the new $4.3 million project will be split into three sources, with the school district paying $1.3 million via a 10-year loan, and the remaining $3 million will be split between funding from a grant from the Arizona School Facilities Board and capital reserve funds the school has been saving for such a project.

Construction on the new building is expected to being soon and should take about eight months to complete.

To aid in clearing the slate for the builder, TSG Construction, the school and the fire department got together to burn down an old shed that was in the way.

With the Digger O’Dell Community Activity Center only yards away from the shed, firefighters had to expertly control the structure fire while keeping the community center and nearby trees safe from the flames.

The burn helped the school remove a building easily and gave firefighters a good opportunity to hone their skills working a structure fire. After about an hour of burning, very little debris remained at the site.

The school district is also utilizing grants for a number of other construction projects, including a $130,000 restroom renovation project, a $1.2 million roof replacement project, and a $100,000 for the demolition of the old elementary school on Main Street. The old building was originally built in 1922 and was condemned by the state.