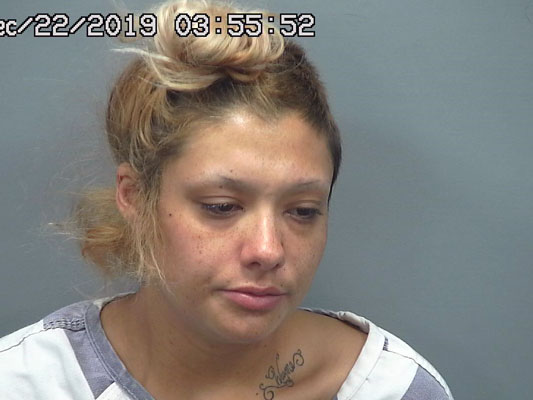 Contributed Photo/Courtesy GCSO: This is the booking photo taken the night of Jorden Simms’ arrest Dec. 21, 2019. Five days later, she was fatally injured after leaping from a moving transport vehicle.

TUCSON – The autopsy report from the Pima County Office of Medical Examiner regarding the death of Jorden Marie Simms, 28, has been released.

Simms was fatally injured Dec. 26, 2019, while being transported by the Graham County Sheriff’s Office to Mt. Graham Regional Medical Center for a Cat Scan. According to law enforcement reports and surveillance video, Simms managed to get loose from her restraints and jumped from the moving Ford Explorer transport vehicle while it was northbound on 20th Avenue. The transport vehicle was en route from Sierra Vista, where Simms had her second sexual assault examination at Lori’s Place after making sexual assault claims against her male arresting officer and, in a separate incident claim days apart, from a female detention officer.

The Arizona Department of Public Safety’s Southern Regional Crime Laboratory in Tucson reported that there was an insufficient amount of DNA gathered from Simms to compare it to DNA taken from either the Safford officer or detention officer.

The autopsy report listed the cause of death as being from blunt impacts to Simms’ head, trunk, and extremities. The manner of death, regarding whether it is listed as a homicide or else wise, was left as “undetermined” according to the report.

Simms was flown to Banner – University Medical Center Tucson, where she was declared brain dead Dec. 27, 2019. On Dec. 28, 2019, an honor walk was performed for Simms as customary for organ donors and she was taken off life support and passed. The Arizona Department of Public Safety (DPS) is investigating Simms’ death and accusations she made regarding sexual assault.

The autopsy report lists Simms suffered multiple fractures during the incident, including to her skull, two ribs, and spine, as well as subdural hematomas and contusions. However, the report lists that “the external genitalia are those of a normal adult female without evidence of injury. The anus is free of lesions.”

The report also lists that Simms had remote tubal ligation, meaning a bilateral interruption of the fallopian tubes preventing pregnancy and that Simms suffered from “multifocal bilateral simple serous ovarian cysts.” A separate toxicology report listed Simms’ blood was negative for all drugs of abuse and forms of alcohol tested.

Simms was initially arrested Dec. 21, 2009, at Walmart after being caught attempting to shoplift and was taken in on a warrant.

During her arrest, she falsely claimed she was pregnant and was having related pains and was then taken to MGRMC. Simms had a $25,000 cash or secured bond warrant out of Yavapai County from November 2019 on charges of theft of means of transportation, possession of drug paraphernalia, and failure to appear in court. Simms was released from the hospital and was booked into the jail on her warrant after attempting to escape and having to be chased down by the arresting officer.

After reporting her claim, she was taken to Lori’s Place in Sierra Vista on Dec. 23, 2019, to have an examination by a Sexual Assault Nurse Examiner (SANE). The examination did not show any signs of trauma or other evidence to support her claim.

Upon her return from the advocacy center, Simms claimed she was sodomized by a female detention officer when she was brought back into the jail.

Attorneys from the Zachar Law Firm, P.C., and Taylor & Gomez LLP, both from Phoenix, have served Graham County with a $5 million notice of claim regarding wrongful death on the behalf of Simms’ mother, Deborah Sanchez. The notice of claim is a precursor for a lawsuit. The notice states that Graham County and the GCSO failed to take all the necessary precautions to keep Simms safe from others – including herself.