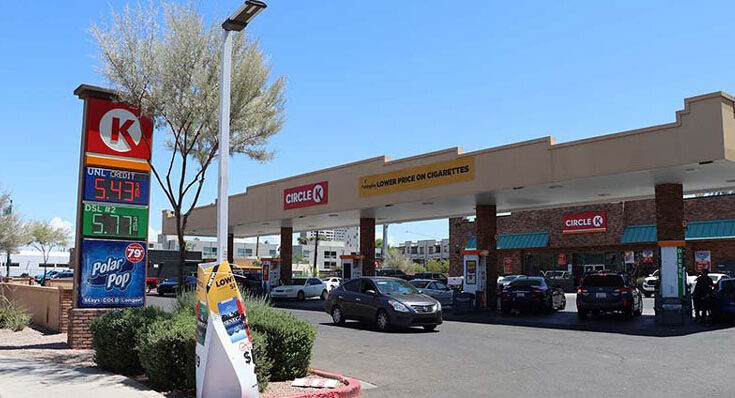 Photo by Omar Iakub/Cronkite News: In addition to the price of gas itself, drivers in Arizona also pay 19 cents in state tax and 18 cents in federal tax per gallon. The taxes are higher for diesel. But Arizona gas taxes are relatively cheap compared to states like California and Pennsylvania, which charge 56.6 and 57.6 cents, respectively.

Biden on Wednesday urged lawmakers to suspend gasoline and diesel taxes on both federal and state levels for at least three months, in hopes of providing consumers direct relief from soaring prices at the pump.

But any tax holidays would have to be approved by Congress, where even some Democrats were cool to the idea, and by state lawmakers. While some states have already moved to temporarily suspend their gas taxes, Arizona is not one of them – nor is it likely to adopt the president’s plan.

“A White House desperate to do something about soaring inflation has hatched a plan that may not even reduce the cost of gas,” said a statement from C.J. Karamargin, an aide to Gov. Doug Ducey. “What’s the point? Even leading members of the president’s own party aren’t on board.”

House Speaker Nancy Pelosi, D-Calif., who earlier this year called a gas-tax holiday “very showbiz,” responded to Biden’s plan by citing current House bills that target price gouging by oil companies, and saying she would wait to see “where the consensus lies on a path forward” on the White House plan.

Biden’s plan comes at a time when Americans are facing record-high prices at the pump. AAA said Arizonans were paying $5.34 on average for a gallon of regular gas Thursday, compared to the national average of $4.94 for the day.

“I fully understand that a gas tax holiday alone is not going to fix the problem,” Biden said during his remarks Wednesday. “But it will provide families some immediate relief — just a little bit of breathing room — as we continue working to bring down prices for the long haul.”

Those taxes go toward the Highway User Revenue Fund, which supports capital improvements and other construction projects for 97 cities and towns and 15 counties, among other local entities, according to the Arizona Department of Transportation.

The state tax brings in about $823 million a year and costs the average Arizona motorist about $103 annually, according to ADOT. A 90-day moratorium on those taxes would save motorists about $25 and cost the state almost $206 million.

Biden said governments can afford the loss in revenue a gas-tax break would bring without cutting back on the infrastructure those taxes typically pay for. He said tax collections are up, and the deficit is down, on the federal level, while federal pandemic relief of the past two years has “fortified state budgets.”

“With the tax revenues up this year and our deficit down over $1.6 trillion this year alone, we’ll still be able to fix our highways and bring down prices of gas,” Biden said. “We can do both at the same time.”

Critics called the plan a gimmick, with Karamargin saying it’s “hard to take this proposal seriously.”

“While policymakers seem to recognize the impact of rising energy costs on American families, some continue to turn to short-term fixes in lieu of long-term solutions,” Frank Macchiarola, American Petroleum Institute’s senior vice president of policy, economics, and regulatory affairs, said in a statement.

Rep. Andy Biggs, R-Gilbert, does not think the tax suspension will help lower the gas prices in the short-term or long-term.

“Biden’s gas tax pause will do little for Americans,” Biggs said in a tweet. “It’s too little, too late.”

And some members of Arizona’s congressional delegation have embraced similar ideas.

Sen. Mark Kelly, D-Ariz., introduced the Gas Prices Relief Act, which would reduce the federal tax rate for gasoline to zero for the rest of 2022, and Rep. Tom O’Halleran, D-Sedona, sponsored a companion bill in the House. Both bills were introduced in February, but neither one has yet had a hearing.

Both Kelly’s and O’Halleran’s bills direct the Treasury to transfer money from the general fund to the Highway Trust Fund to make up for the lost tax revenue, a plan Biden approves of. O’Halleran said that not only does he support the White House plan, he thinks it should be extended.

“Arizonans in our district drive more than most to get to school, work, and the doctor, some traveling over 100 miles a day,” O’Halleran said in a statement about Biden’s plan. “This gas tax suspension would put money directly back into their pockets, lower shipping costs, and help address inflation – I encourage the president to extend his suspension ask to the end of this year.”